A new report that looks into the potential environmental effects of fracking has revealed that drilling and fracturing shale gas wells poses a 'significant risk' to freshwater supplies across the globe.

The first-of-its-kind report, from the World Resources Institute (WRI), points to a series of water-related challenges that could limit shale resource development with specific case studies of the impacts of fracking in China, Argentina and the UK. (Scroll down for Executive Summary).

In areas where shale gas and tight oil extraction might face the greatest water challenges, Government policies will be needed to guarantee water security, protect the environment and avoid business risks if shale energy is developed, the report states.

Writing in the report's foreward, the WRI's president Andrew Steer said: "With interest in shale gas growing, the time is ripe to understand its constraints. This report will be an invaluable resource to businesses, policymakers, and civil society in ensuring water for people and the planet."

Drilling and then hydraulic fracturing each shale gas well uses large volumes of water for short periods of time - between seven and 25 million litres, according to the WRI.

In China, the report found that more than 60% of shale resources are in areas of high to extremely high baseline water stress or arid conditions. "As the world's largest greenhouse gas emitter, the country's shale resources could be a key to addressing climate change, but its water concerns must be addressed," the report states.

Argentina, on the other hand, is an area where competition for water is less concerning, with 'low to medium stress' for 72% of its vast shale resources - the country is South America's largest natural gas producer and consumer, and possesses the world's second-largest technically recoverable shale gas resources.

But here in the UK, the fracking situation is 'complicated'. Industrial water use accounts for more than 30% of the nation's total water demand, but those withdrawals have been shrinking for the past 10 years as natural gas and oil production declines. The Government is now, however, offering tax breaks to boost shale development, and the WRI believes it will need to manage water-related risks if shale drilling and hydraulic fracturing expands.

INFOGRAPHIC: Water risks of fracking in the UK 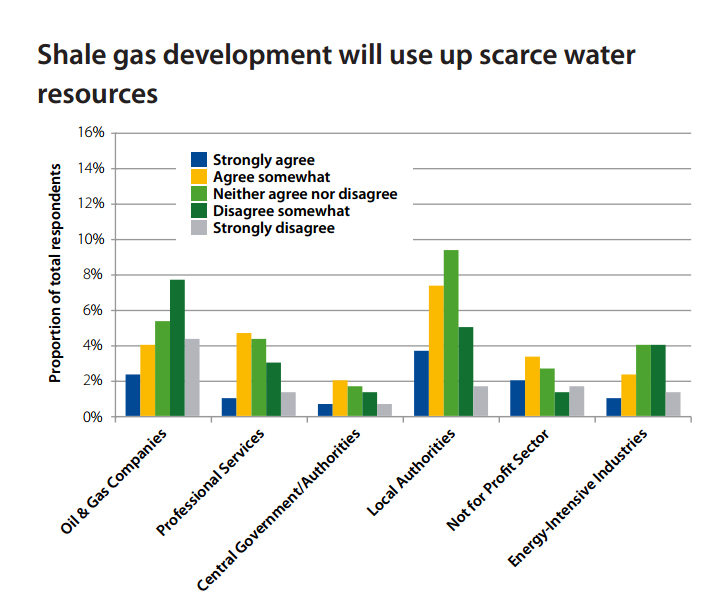 Earlier this summer, the British Geological Survey (BGS) and the Environment Agency (EA) released a series of underground maps which discovered that many shale gas deposits overlap with major water aquifers. The provided a new way to visualise geological data and assess the potential of fracking to contaminate drinking water with methane in England and Wales.

More than 45,000 people around the country have joined legal moves to use trespass laws to block energy companies from fracking under their properties. But the Government has already made controversial legal changes to make fracking easier by removing the requirement for individual homeowners to be notified of a planning application to drill or frack beneath their home. In January, a Lords committee reported that ministers had rushed through this planning reform despite overwhelming opposition and without adequate scrutiny.