Green Party Leader Natalie Bennett has responded furiously to the decision by Ofcom to exclude the Greens from its list of 'major parties' ahead of the General Election in May, claiming that it 'risks doing damage to British democracy.'

In its consultation, the media industry regulator said: "The [Green] Party has not demonstrated significant past electoral support in General Elections.

"The Green Party has performed better in some other forms of election, such as the 2014 European Parliamentary elections, obtaining 8% and 8.1% of the vote in England and Scotland.

"In terms of evidence of current support, the party's opinion poll rating in Great Britain-wide polls has increased in recent months to 5.9% in December 2014 (4% on average during 2014)."

In response, Bennett said: "It is notable that the Ofcom draft focuses heavily on 'past electoral support'. The media regulator has failed to grasp the fast-moving, fluid state of British politics today, and that fact that voters are seeking out the choice of real change.

"Ofcom should not be making that option harder to find, but ensuring that voters have the chance to hear and judge the full range of political options today."

Bennett claims the decision ignores 'strong support' for the Green Party in certain sections of the community such as youths and students.

A YouthSight survey in December discovered that the Green Party is now the second choice party for students, with 70% of those who voted stating the reason being the Party's environmental policies. A YouGov poll suggests that support for the Greens among 18 to 24-year-olds has increased from 7% at the start of 2014 to 19% by the end. 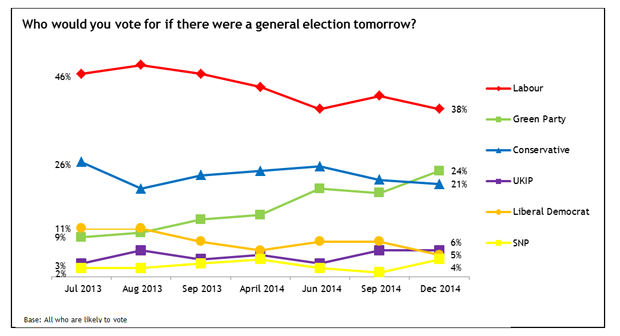 As part of its manifesto, the Green Party promises that it would:

Ofcom states that 'UKIP may qualify for major party status in England and Wales for the General Election and English local elections on 7 May, 2015.'

Co-convener of the Scottish Greens, Patrick Harvie, has responded to Ofcom's proposal, warning that it will lead to 'further elevation of Ukip in UK-wide TV coverage' and 'undoubtedly skew the range of voices Scottish voters hear'.

He said: "It's clear we're heading for an election like no other, with a huge public appetite for a wider range of views and a changed political landscape in Scotland. The electorate here is more engaged than ever; Ofcom's ill-considered proposal wouldn't reflect this on our screens.

"Greens across the UK are enjoying a membership surge, are regularly outpolling the Libdems and we will continue to make the case for inclusion in set piece TV debates and wider media coverage, both at UK level and here in Scotland."

. @tnewtondunn @TheGreenParty If confirmed, it's a disgraceful, indefensible decision by Ofcom.