England will today (5 October) follow in the footsteps of the rest of the UK by introducing a 5p plastic bag tax for large retailers.

The 5p charge has been introduced by the Government and aims to reduce the 7.64bn carrier bags that end up in landfill

The 5p charge has been introduced by the Government and aims to reduce the eight billion non-biodegradable single use carrier bags (SUCBs) that end up in landfill or littered on our streets.

Environment Minister Rory Stewart said: "The more bags we take from the shops, the more plastic makes its way into our environment, blighting our high streets, spoiling our enjoyment of the countryside, and damaging our wildlife and marine environments.

"Simple changes to our shopping routines, such as taking our own bags with us or using more bags for life, can make a huge difference in reducing the amount of plastic in circulation meaning we can all enjoy a cleaner, healthier country.

"Wales, Scotland and Northern Ireland have seen a dramatic fall in the number of plastic bags taken from supermarkets and we can expect a significant reduction in England, possibly by as much as 80% in supermarkets and 50% on the high street."

It is hoped that over the next decade the levy will save £60m in litter costs while simultaneously saving £13m in carbon savings across the UK. But unlike the rest of Britain, the charge in England only applies to shops that employ more than 250 staff members.

The levy was incorporated into Scotland’s shops in 2014 in a move that Environment Secretary Richard Lochhead heralded a "tremendous success" that has seen bag use "plummeting and millions of pounds raised for good causes". Scotland has seen bag use fall by 12.8% in this time.

Wales and Ireland also introduced the levy in 2011 and 2013 respectively. Wales has seen bag use fall by 71% over four years with Ireland’s falling 42% over two years.

The English roll-out has been met with positive support among green campaigners and the general public alike. Research from moving-saving experts Make It Cheaper found that 60% of English shoppers support the charge, while a further 80% feel that biodegradable bags should be exempt from the charge.

However, there is a belief that the charge in England - which will apply to some shops and not others - will confuse the public. Campaigners Friends of the Earth’s senior resources campaigner David Powell said: “Charging for plastic bags has made a massive difference in the rest of the UK, so it’s about time England caught up.

“The English charge is a good start, but it makes no sense that it only applies to big retailers. Shoppers will get mixed messages depending on where they shop. This could defeat the main point of the charge in the first place – to change the way people and stores think about over-using plastic bags.

"In Wales, 90% of businesses large and small have said their 5p charge hasn’t had an impact on trade, and three quarters of the Welsh population think the charge has been a good thing all round.”

The Government hopes that the levy will encourage use of more recyclable products and ‘bags for life’, as England aims to meet the EU commissioned target of a 52% recycling rate. Currently England’s recycling rate sits at 45% from last September’s data, still 7% short of the target. Wales is the only country in the UK currently above the threshold, recycling 54% of its waste.

While public support is a promising sign, some recycling campaign groups believe the charge will only be effective when social behaviour surrounding litter is adapted.

Keep Britain Tidy’s chief executive Allison Ogden-Newton said: “This is the first government action in a decade that is specifically designed to tackle our country’s litter issue. We hope the charge will see a significant reduction in the use, and subsequent littering, of plastic bags.

“Obviously there is a lot more that needs to be done to change the behaviour of those who think it is acceptable to throw their rubbish on the floor but Monday marks a significant first step on the road to a litter-free country.” 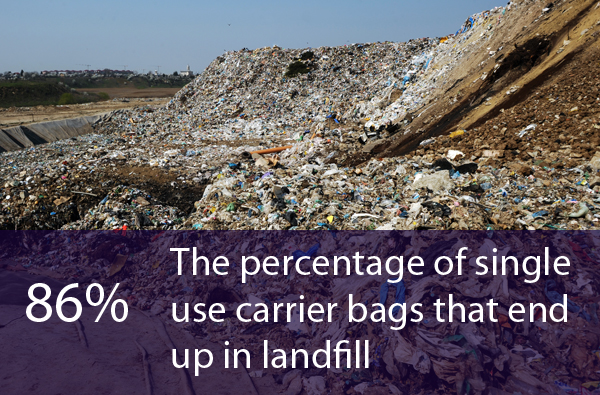 Clean Up Britain is a campaign that focuses all of its attention on reducing the amount of litter in Britain. Founder and chief executive John Read said: "While the bag levy will hopefully encourage consumers to reduce, reuse and recycle plastic bags; even if plastic bag usage is reduced by as much as 80%, there will still be 1bn plastic bags a year potentially being littered in England. That's where technology such as oxo-biodegradable bags can also play a very important role in combating the problem of plastic bag litter.

"The fundamental issue here is still behavioural change - that’s the only sustainable solution to solving the very costly problem of litter.  Without a co-ordinated, collaborative and professional national campaign which seeks to change the behaviours of the 48% (29 million) British people who admit to dropping plastic bags and other litter, the problem will not be solved."