First Milk, one of the UK's largest cheese creameries, has announced the completion of the first phase of construction of a bio-energy plant at its dairy factory in Cumbria.

Once operational in early 2016, the plant will generate 1000m3 of biogas a day from waste dairy residue.

Some bio-methane will be used in the creamery for steam generation, reducing the factory’s annual energy cost by 25%, providing around 40m kwh a year and saving 7,000 tonnes of carbon.

The rest of the gas will be sent into the grid, making the Cumbria factory the first dairy processing site in Europe to deliver biogas to the grid.

Revenue benefits will include 20-year index-linked, government-backed incentives from the Feed-in Tariff and Renewable Heat Incentive, while the system will also help reduce waste management costs.

Anaerobic Digestion specialist Clearfleau will be providing the technology and oversee the construction of the new plant.

Tom Northway, who is overseeing the project on behalf of First Milk, said: “Clearfleau's on-site digestion technology has been selected as it has a proven track record in the dairy sector.

"It will optimise gas output and deliver a solid return on capital invested. We are delighted this will be the first plant in the dairy sector to supply green gas to the national gas grid.”

Clearfleau was recognised at edie’s Sustainability Leaders Awards in 2014 for its AD plant in Nestle’s Fawdon factory. 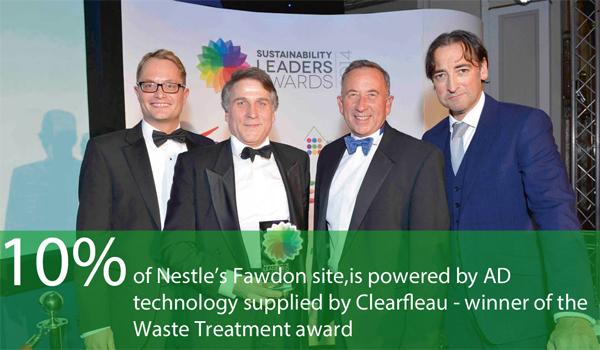 "It is a very positive move by First Milk to future proof their leading creamery operation by generating a significant proportion of their site’s future energy needs.”

Wyke Farms, one of the most sustainable cheese companies in Britain also operates a similar AD plant which converts around 75,000 tonnes of cheese-related waste into biogas every year.