Growing demand for sustainable seafood not being met by retailers

Supermarkets may well have upped their efforts when it comes to food waste and emissions reductions, but many are still not doing enough when it comes to sustainably caught fish, according to new research from the Marine Stewardship Council (MSC).

Customer demand for sustainable fish has soared, but supermarkets are falling behind on the amount of sustainable products they stock

The research, released today (30 January), reveal a growing gap between supermarkets when it comes to offering their customers eco-labelled sustainable seafood choices - despite the availability of MSC-certified fish at an all-time high. 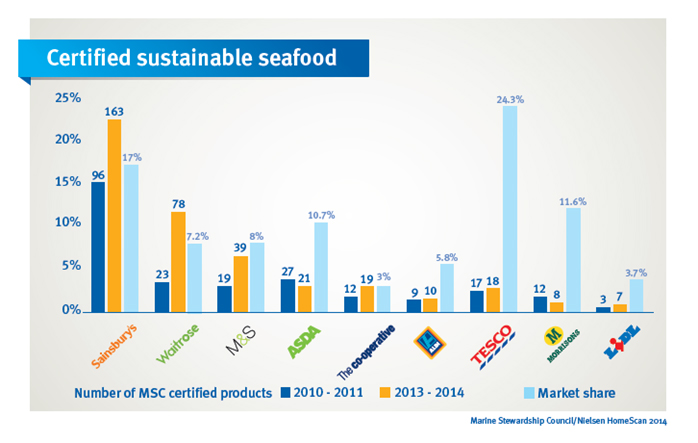 "Sainsbury's has already shown that price need not be a barrier to sustainability with even their Basics fish fingers MSC certified, at 65p a pack. It's time for the other retailers to step up to the mark."

Earlier this year, the MSC published an independent consumer survey which revealed that 71% of UK respondents said they believed that it is important that supermarkets sell sustainably caught seafood. Respondents also said they trusted eco-labels on products (61%); more than recommendations from family/friends (57%), information from supermarkets (48%) and brands' own promises on products (41%).

In other areas of sustainability, retailers have shown great improvements over the past few years. The British Retail Consortium's first progrss report, released earlier this week, showed that supermarkets achieved a 13% reduction in absolute carbon emissions between 2005-2014, with a 2020 target of a 25% reduction - a trajectory that goes beyond the UK and EU carbon reduction targets.