Businesses in the hospitality sector which had previously signed up to lower key footprints and cut food waste have seen carbon emissions fall by 3.6% for 2014 as they close into the 5% reduction target for 2015.

Companies including Sodexo, Brakes and Compass previously signed up to the Hospitality and Food Service Agreement (HaFSA) created by WRAP in 2013. Combined efforts from the companies have seen emissions reduced by 30,000 tonnes with 15,000 tonnes of waste diverted from landfill – saving the sector £3.6m.

Dr Richard Swannell, director of sustainable food systems at WRAP, said “These achievements are the result of a lot of hard work by many people, and a huge undertaking by the sector over two years. The targets require real effort, so it’s great to see signatories performing well against both. Given this performance, I’m sure the final results will set a solid foundation for The Courtauld Commitment 2025.”

The Agreement, which includes food waste generated by hospitality and food service businesses as well as packaging, has seen food distribution services rise by 47% which amounts to 528 tonnes of food sent to charities and services.

The combined recycling rate rose from 45% to 57% still short of the 70% target set by WRAP. 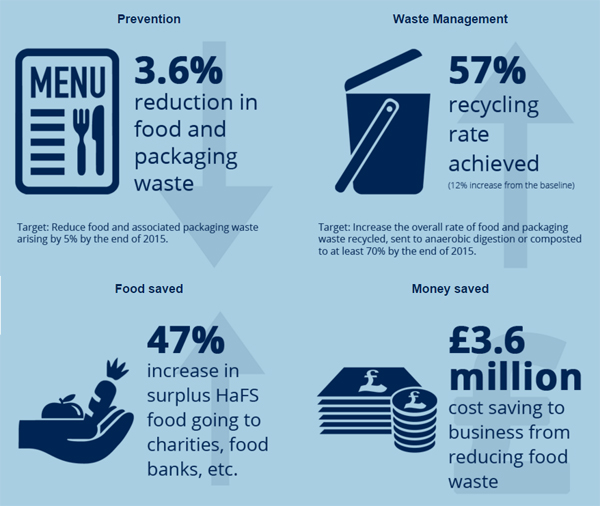 Resources Minister Rory Stewart said, “From big business through to the weekly shop – we all have a role to play in reducing food waste.

“It’s great to see progress being made by the hospitality sector - I want to encourage the whole food and drink industry to get behind our renewed push to reduce all waste – The Courtauld Commitment 2025.

“This is not only crucial for our natural environment, but our economy too – no food should go to waste.”

Collaboration has been one of the main drivers as businesses look to promote online training resources – such as menu planning - for the Hospital Caterers Association and Chartered Institute of Environmental Health.

Sodexo has introduced monitoring and measuring systems into their production cycles to assess the levels of waste produced while Compass is promoting initiatives around Front of House packaging.

One of the more successful redistribution projects is Neighbourly, a social media platform which connects local community projects to companies that want to make a difference.

Marks & Spencer have signed on with neighbourly in the hopes of reducing food waste by 20% by 2020. The partnership will see 150 of the supermarket's biggest stores pass surplus food onto a host of local charities.