A new initiative launched has been launched by WRAP to reduce the carbon, water and waste footprints of the textiles industries across 11 European countries.

It aims to divert over 90,000 tonnes of clothing away from landfill each year in Europe by 2019.

"To be leading on a project of this magnitude is something I am very excited about, and applying tried and tested approaches such as voluntary agreements and consumer campaigns across Europe, will really take our expertise to the next level. I look forward watching this initiative progress”.

Denmark, Finland, Germany, Italy, Netherlands, Norway, Poland, Romania, Spain, Sweden and the UK are all signed up to ECAP, with plans to expand into Asia.

The project, based on the principles of WRAP’s Sustainable Clothing Action Plan (SCAP) in the UK, will promote ambitious targets revolved around producing closed loop production cycles from brands, retailers, manufacturers and charities, which ensures that less clothing is sent to landfill. 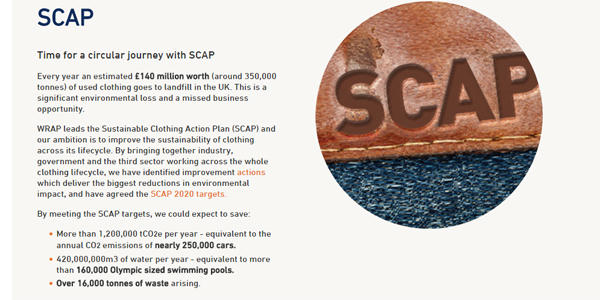 ECAP will also task retailers with encouraging consumers to buy less clothing. The plan will also promote resource efficiency and growth in the sector.

Commenting on the initiative, Jonas Eder-Hansen, development director of the Danish Fashion Institute, said: “Up to 80% of a garment’s environmental impact is decided in the design phase. Only few designers and product developers realise their potential to create sustainable change through their decision.

"As part of ECAP, DAFI is excited to create an online learning platform for designers and product developers to fulfil their potential and design for longevity. The results will build on DAFI’s long tradition for working with designers through its Fashion Source library of eco and innovative materials.”

Earlier this year, WRAP named the textile sector alongside food & drink and electronics as areas that account for 25% of the UK’s carbon footprint; 80% of its water footprint and 40% of UK household waste. To revolutionise these sectors, WRAP unveiled details of its strategic plan for the next five years, with an aim to "create the step-change needed to meet the demands of future generations".

Last week, edie reported that clothing giants including H&M, Nike and Adidas had launched a new initiative to improve working conditions in clothing manufacturing across the world. The project aims to streamline the auditing process for manufacturers which will allow brands to reinvest the new savings into in improving social welfare for workers.

H&M has stood out in the sector’s sustainability progress. The company recently launched a new closed-loop recycled denim range, while in August it announced a new €1m grant for pioneering ideas which close the loop on discarded clothing.