iPhone vs Android, Safari vs Chrome, iTunes vs Youtube. The arms war between Apple and Google has reached a new battlefield: sustainability.

Google uses renewable energy to power 35% of its operations

Last week edie delved into five ways Apple is becoming a leader in sustainability, spurred by the announce of its new headquarters - 'the greenest building ever'.

But this week Google has released details of its own Silicon Valley behemoth, with equally leafy credentials. So the follow-up question is obvious: just how green is Google?

In 2007, it became the first internet company to be completely carbon-neutral, while it has been identified by Greenpeace as an industry leader and a trend-setter for its use of renewable energy.

Here are five ways Google is becoming a green giant...

1)  Its new HQ will be a sustainability benchmark

Google’s proposed new campus in Silicon Valley promises to "blur the lines between buildings and nature". It will be covered by large translucent solar canopies, controlling the climate inside and absorbing energy, yet letting in light and air.

"And we’re committed to do everything we can to save energy,” said David Radcliffe, Google vice-president for real estate. Unlike Apple's proposed enclosed spaceship headquarters, the Google campus looks to be open and and transparent; both literally and figuratively. “ 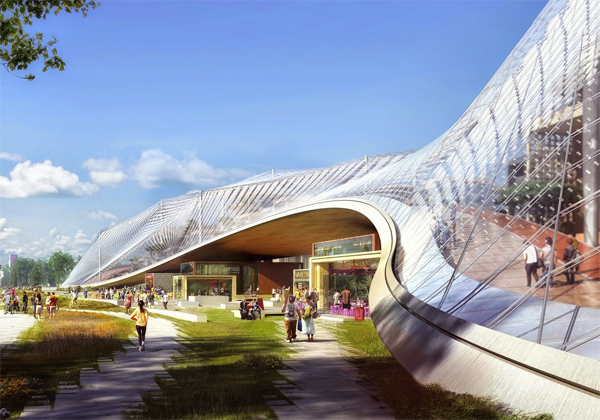 2) It has invested big bucks in renewables

Last week, edie reported that Google had invested $300m in domestic rooftop solar panels, as part of a long-running renewables plan. Earlier in February, the company signed a long-term agreement to offset the energy consumption of its main campus with wind power. The agreement will see 43MW of carbon-free electricity poured into the grid every year. Overall, Google uses renewable energy to power 35% of its operations and has invested $1.5bn in renewable projects.

3) It operates the smartest data centres in the world

Google’s enormous data centres are famed for using 50% less energy that an average data centre. Some of the efficiency measures are simple – the temperature inside the centres is allowed to reach 80 degrees and employees are encouraged to wear shorts – while some involved more advanced technology. For example Google uses thermal modelling to locate “hot spots” inside the centres. Then it uses simple, cost-effective tactics (like sealing sheet metal and hanging plastic curtains) to prevent hot air from mixing with the cold.

It also utilises free cooling i.e. using the local natural environment to cool the equipment such as cold outside air, water evaporation or thermal reservoirs.

Using Gmail is more energy efficient than using email hosted on local servers (such as on a server in your office or room). This is because Gmail is hosted in the cloud, which is large, so it can more efficiently distribute resources among many users. This study demonstrates significant cost and carbon savings for the four million businesses that use Gmail.

A business using Gmail decreases the environmental impact of their email service by up to 98%. In fact, small businesses with less than 50 people can save up to 172.8kWh of energy and 101.6kg of carbon per user per year by using Gmail instead of locally-hosted email.

5) It may have invented the world's next great transport system

No, not Elon Musk's hyperloop - although that is equally groundbreaking. Google’s self-driving car could literally transform the way people move around in a way that is great news for the planet. A fleet of these electric or hydrogen-powered vehicles could operate in a zip-car style sharing system, dropping one person off then moving on to pick up someone else. As well as the obvious emissions reductions from using sustainable energy sources, the system would reduce the amount of cars that needed to be manufactured: the average car is parked for 92% of the day.

The bad news: Google is missing a trick! The website Blackle.com is a black version of Google, which has thus far saved almost five million watt hours, simply by not lighting up the screen.

It may not be a massive amount of energy compared to the savings Google makes elsewhere, but as Blackle states in its introduction "The site reminds us that we need to keep taking small steps to save energy."