"Going green should not cost the earth" proclaimed George Osborne in his Autumn Statement as the Chancellor confirmed plans to reform the Renewable Heat Incentive (RHI) and slash budgets for DECC and DEFRA.

In a wide-ranging, one-hour speech dedicated to "putting Britain's security first", Osborne today (25 November) set out the state of the UK economy and spending plans for the next four years.

He began by confirming sharp departmental cuts, as part of the Government's programme to deliver a budget surplus by 2020. 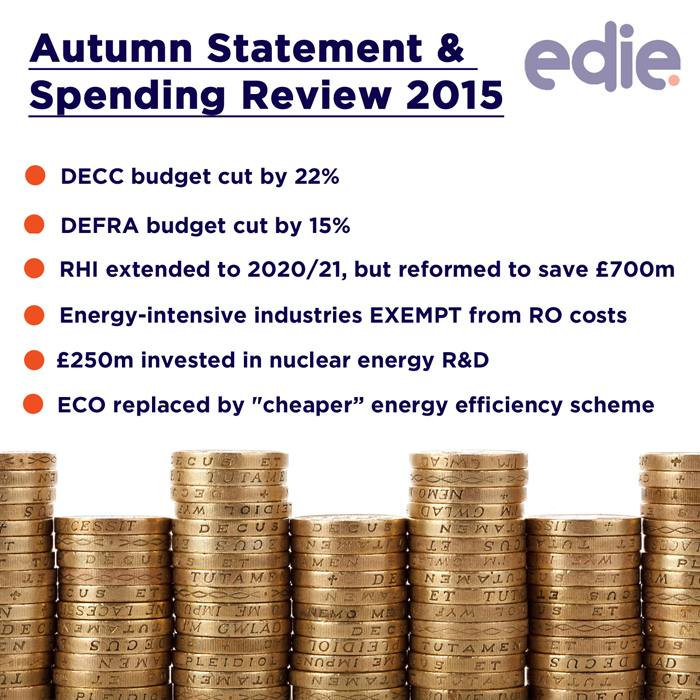 DECC's budget will be reduced by 22% over the next four years, delivered through efficiencies in corporate services and reducing the cost of contracts.

The Department's innovation programme will, however, be doubled to £500m over the next five years, which will strengthen the future security of supply, reduce the costs of decarbonisation and boost industrial and research capabilities.

The official Autumn Statement document reads: "DECC will deliver £220m of resource savings by 2019-20 through efficiencies from pooling back office and corporate services, and reducing the costs of contracts to manage the country’s historic coal and nuclear liabilities."

Osborne then announced that the "day-to-day spending" of DEFRA - which has responsibility for safeguarding Britain's natural environment - will fall by 15%. As part of that, the department's administration costs will be slashed by 26%.

DEFRA will have £2bn set aside to protect 300,000 homes from flooding, while £130m capital investment will go towards the department's science estates and equipment by 2020.

The document adds: "Through its ambitious efficiencies programme, DEFRA will become a more streamlined, digital department, sharing back office functions like IT, human resources and finance with its network bodies to reduce unnecessary bureaucracy, and devolving roles to the local frontline to ensure effective service delivery."

Later in his speech, Osborne claimed "there is no more important infrastructure than energy" as he pledged to double spending on energy research and also double the support for low-carbon electricity and renewables. But it is important to note that this is not actually 'new' money - it is just the existing fund for supporting renewable energy agreed under the coalition Government.

The RHI scheme, which provides financial incentives suppliers of of renewable heat, will see its funding rise to £1.15bn in 2021, "to ensure that the UK continues to make progress towards its climate goals."

However, this actually means that spending on the RHI scheme will be around £690m lower than what was originally forecast by the Office for Budget Responsibility (OBR). And the UK still needs 20TWh more renewable heat by 2020, to meet the Government’s 12% target.

Responding to the announcement, Renewable Energy Association (REA) chief executive Nina Skorupska said: "Our members recognised the need to make savings and presented to Treasury and DECC how we could optimise the RHI budget. A £700m cut is large, but we look forward to working with the government on reforming this crucial area."

The Autumn Statement document also states that the Government will provide an exemption for energy-intensive industries - including the steel industry - from the policy costs of the Renewables Obligation and feed-in tariffs, rather then those industries having to pay a cash compensation.

This will ensure that those industries "have long-term certainty and remain competitive", according to Osborne, adding £5 onto projected household energy bills.

The document adds that a response to the consultations on changes to the Renewables Obligation and Feed in Tariffs schemes will be published shortly, with details on "how to implement cost control on these schemes".

Speaking to edie ahead of the Autumn Statement, a spokesperson from the Solar Trade Association (STA) said: "If the Government proceeds with its proposed changes regarding the Feed-in Tariff and the Renewables Obligation, the extreme cuts to tariffs and maximum deployment caps planned for solar PV will damage the economics of business investment in solar.

Osborne also reiterated the Government's support for nuclear energy, with the Autumn Statement document pledging an investment of "at least £250m over the next five years" in a nuclear research and development programme that will "revive the UK’s nuclear expertise" and position the UK as a "global leader in innovative nuclear technologies".

Osborne then confirmed further support for the creation of the shale gas industry, by ensuring that communities benefit from a Shale Wealth Fund, which will see up to 10% of the tax revenues from shale gas spent in local areas and "could be worth up to £1bn", according to the document.

In response, Greenpeace policy director Doug Parr said: "The Chancellor’s promise of a wealth fund for fracking flies in the face of what local people want. Given that support for fracking is at an all time low it’s no surprise that the Chancellor is resorting to little more than bribery to convince the British public to support his pet project."

Ahead of Osborne's speech, edie drew up an Autumn Statement wishlist of the hopes and expectations of sustainability leaders, industry representatives and green groups. An increase in spending to tackle air pollution, tax incentives to drive energy efficiency and a date for the next Contracts for Difference (CfD) auction were all on the list.

But it appears Christmas isn't coming early for green businesses this year. And, with critical climate talks in Paris just around the corner, Osborne has left green groups and businesses lacking confidence when it comes to renewable energy investment and building a low-carbon future.

“With the Paris summit just around the corner and £48 billion a year planned for infrastructure projects over the next five years we believe that investment in warmer, energy efficient homes should be prioritised. Energy efficiency can bring £8.7 billion of economic benefit to the UK and, put simply, our homes are infrastructure too.

“We need housing equipped to conserve heat and homes that use less energy. For this reason, the government should think of energy efficiency as the first fuel because the cheapest energy is the energy that isn’t used. We simply can’t afford for today’s decisions to create bigger problems for tomorrow.”

“The Chancellor was keen to emphasise the Government’s green credentials ahead of Paris, but they are going backwards on one of the most cost-effective opportunities - improving the energy efficiency of our existing housing stock. The cuts to ECO and RHI will see more jobs lost in the industry and vulnerable households will continue to be trapped by unaffordable energy bills.

“Despite the announcement of expected cuts to departmental budgets at Defra and DECC in today’s Comprehensive Spending Review, George Osborne, The Chancellor of the Exchequer, made some positive noises on addressing environmental concerns. Indeed, his reference to the Paris climate talks is particularly welcome, not to mention his willingness to protect spending on flood defences to protect 300,000 homes.

As is often the case with high-level statements to Parliament, the environment was mostly overlooked. However, there are some important issues for the environmental technologies and services sector that EIC will endeavour to have an impact upon as details begin to reveal themselves in the next few weeks.”

“The Chancellor’s green-bashing is a further reminder that our environment is not safe in his hands. With critical climate talks in Paris just around the corner, George Osborne has shown he couldn’t be less interested in green investment and building a low-carbon future.

“A huge gaping hole remains in the Government's flood defence budget - until that's plugged, people will increasingly be put at risk of flooding as climate change takes hold.”

“Budget cuts will of course be challenging for those affected departments to manage, and ESA will continue to work closely with Defra, and colleagues in other departments, to ensure that we meet our shared objectives for growing a thriving waste, recycling and resource management industry.

“At the same time, ESA was very pleased to see that the Government has listened to the industry’s strong representations on the need to fight waste crime, and has allocated £20m to the Environment Agency over the next five years to stamp out this blight on the sector which undermines legitimate businesses and their investments.”

"The Chancellor’s promise of a wealth fund for fracking, flies in the face of what local people want. Given that support for fracking is at an all-time low it’s no surprise that the Chancellor is resorting to little more than bribery to convince the British public to support his pet project."

“Government departments such as DEFRA and its regulatory agencies provide important – and often overlooked – services that are key to the effective functioning of our economy. These include providing access to high quality natural resources such as water and interpreting UK and EU environmental legislation in a way that is pragmatic and can support business innovation. The implementation of the different settlement plans must ensure that these government departments and their regulatory agencies have sufficient resources to continue providing these services effectively.”

“The announcement to create a Shale Wealth Fund (SWF) to support the creation of a shale gas industry should accelerate investment in this sector. One of the biggest challenges the sector faces right now is funding projects as a result of drawn out planning applications and the low current gas price.  This long planning is making investors reluctant to hand over cash as under the current system projects are uneconomical.”

“Although these cuts are smaller than feared, it remains clear that there is a growing gap between the Government’s stated ambition to restore nature in a generation and its capacity to do so.  Today’s announcement creates greater uncertainty for wildlife but it also impacts on the air we breathe, the water we drink and the quality of life we enjoy.”