Aeroplane efficiency more than a decade behind schedule

Despite a 45% reduction in average aircraft fuel burn in the last 40 years, the aviation industry is still around 12 years behind efficiency targets set by the UN's aviation body.

The UN’s International Civil Aviation Organization (ICAO) has set two main goals for aviation: to achieve an annual 2% fuel efficiency improvement between 2010 and 2020 and an aspirational 2% improvement per year from 2021 to 2050.

However, the average fuel/ passenger kilometre fell at a compounded annual reduction rate of 1.3% since 1968 and an even lower 1.1% since 2010, putting the industry around 12 years behind its targets, according to the ICCT. 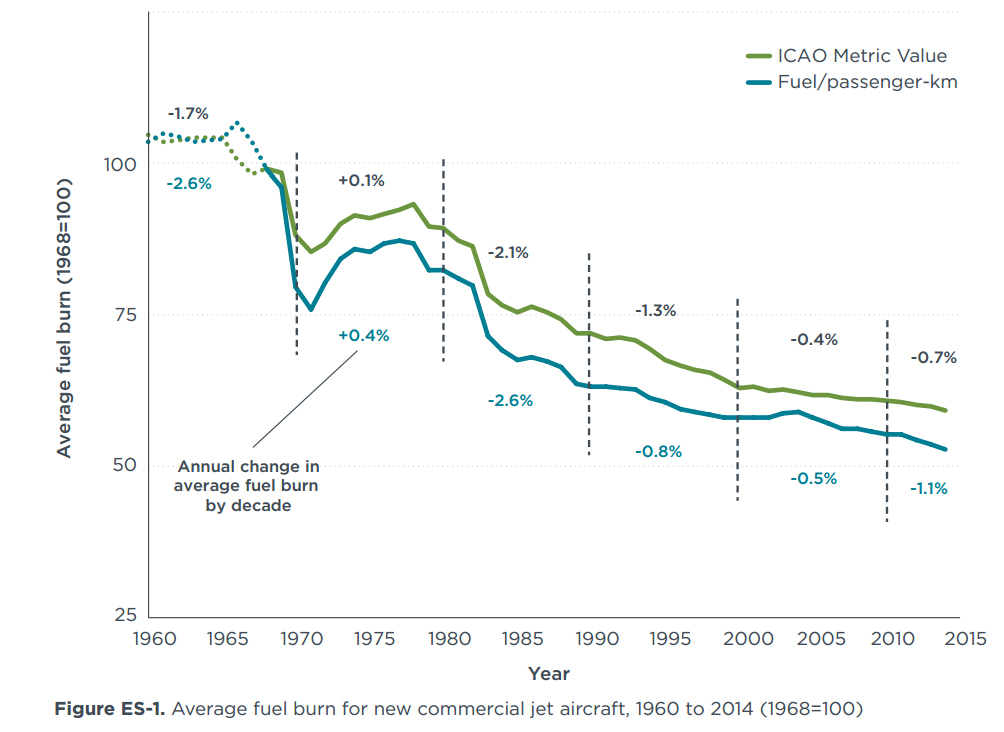 The report therefore calls for the creation of a “meaningful CO2 standard” to provide an extra incentive for new technology upgrades. The report also suggests introducing differentiated landing fees based on the fuel efficiency of in-service aircraft.

The findings prompted concern from green transport lobbyists, who pointed out that total aviation CO2 emissions quadrupled between 1960 and 2006 and are on pace to triple again by 2050 –  a time by which many developed countries hope to reduce their emissions by up to 80%.

In 2012 commercial aircraft emitted about 700 million metric tons of CO2 worldwide; if commercial aviation was a country, it would rank seventh after Germany in terms of CO2 emissions.

Andrew Murphy, the sustainable aviation officer at lobby group Transport & Environment said: “When demand for your service grows four times quicker than the fuel efficiency of new planes, you clearly have a CO2 emissions gap.

“This study confirms the open secret that planemakers are not delivering the efficient airplanes needed to meet UN goals. ICAO must help airlines meet their own climate goals and agree a CO2standard that actually forces new technology in the fleet, rather than doing business as usual.”

Another solution to the emissions gap could be the increased uptake of biofuels, but the technology remains in its nascent phases. During the past five years, commercial airlines flown less than 600,000 miles powered by biofuels.