BMW and Coca-Cola join latest wave of RE100 pledges

Carmaker BMW and soft drinks producer Coca Cola Enterprises are among the latest companies pledging to source all of their electricity from renewable energy sources as they join The Climate Group's RE100 initiative.

RE100 has released estimations claiming that when the 53 companies are operating with 100% renewable energy they will create demand for 90.1TWh of renewable electricity

Four other companies have pledged to secure 100% renewable electricity as part of the campaign - International Flavors & Fragrances, Nordea Bank, Pearson and Swiss Post - taking the total number of companies signed up to RE100 to 53.

The pledges were announced yesterday (7 December) during the COP21 climate talks in Paris, where RE 100 founding partner IKEA is showcasing the campaign’s success story.

Hubert Patricot, European president at Coca-Cola Enterprises, said: "Climate change is one of the most significant material risks for our business. Tackling climate change is also the right thing to do for our planet and we believe that the transition towards a low-carbon economy can deliver significant long-term economic benefits.

“Committing to 100% renewable electricity will help us to grow a low-carbon business and deliver our wider commitment to reduce the carbon footprint of our core business operations by 50% by 2020. Working with like-minded organisations like RE100, we are convinced we can accelerate the pace of change."

Emily Farnworth, RE100 campaign director at The Climate Group, said: “Many companies are switching to renewable power at a remarkable rate, and encouraging their suppliers and customers to do the same.

“Our analysis of the private sector’s electricity consumption and carbon emissions indicated that a switch to power from renewable sources could cut global CO2 by nearly 15%. By acting together, the world’s leading companies are creating a thriving renewable energy market that will help keep a global temperature rise below two degrees.” 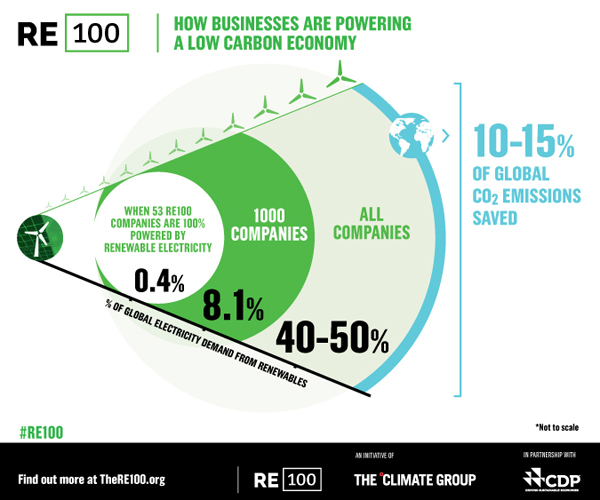 Last week, Microsoft and Adobe announced they were joining the RE100 pledge alongside Google, which also announced it was adding 842MW of renewable energy capacity.

Global manufacturing emissions in 2014 were an estimated 5.55 million metric tons - 21% lower than the business-as-usual forecast but 16% higher than the 2004 baseline.