BP's chief executive Bob Dudley has joined calls for a global carbon price to counteract spiralling emissions over the next 20 years, as projected by the oil giant's latest Energy Outlook report.

The Outlook Report predicts that emissions will rise by 1% every year from now until 2035. This adds up to a 25% increase, which is "materially higher" than a scenario whereby global temperature rises are limited to 2C, the company says.

Dudley suggested that policymakers should introduce a "meaningful price on carbon" to tackle the issue.

"A global carbon price would help to unleash market forces and provide the right incentives for everyone to play their part," he said. "History has shown the power of market forces in making economies less energy intensive as people have found more efficient ways to use energy."

His calls echo those of the chairman of Parliament's Energy and Climate Change Committee Tim Yeo, who this week stated that a new global climate deal must allow for carbon trading between countries.

The expected global emissions rise is driven by economic growth, as BP projects the world economy to nearly double in size over the next 20 years, causing energy demand to rise by 40%. Half of that demand increase will come from India and China, with a corresponding rise in emissions. By 2035, over 70% of carbon emissions will come from non-OECD countries. 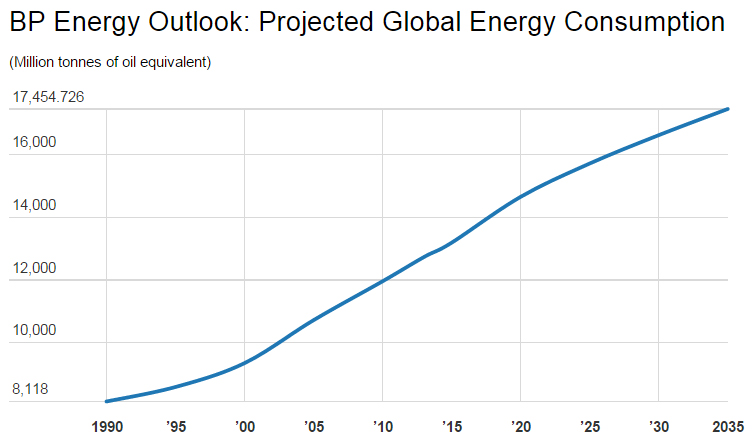 By contrast, BP expects the EU to become the most energy efficient economic region in the world by 2027. EU primary energy consumption is expected to decline 6% by 2035 reaching its lowest level since 1984.

There will also be a broadly equal split in energy sources, as oil and gas each account for 29% of consumption in 2035 followed by renewables with 18%.

The report projects that demand for oil will increase by around 0.8% each year to 2035. The rising demand comes entirely from the non-OECD countries; oil consumption within the OECD peaked in 2005 and by 2035 is expected to have fallen to levels not seen since 1986. By 2035 China is likely to have overtaken the US as the largest single consumer of oil globally.

The current weakness in the oil market, which stems in large part from strong growth in tight oil production in the US, is "likely to take several years to work through". In 2014, tight oil production drove US oil output higher by 1.5 million barrels a day - the largest single-year rise in US history.