Telecommunications giant BT has secured top spot in a report of the carbon reporting performance of the top 100 companies floated on the Financial Times Stock Exchange (FTSE 100).

For the first time in its five year history, the report provides an overall analysis of business sectors as well as individual companies

It is the second year running that BT has topped the Carbon Reporting Performance of the FTSE100, coming ahead of M&S which shared the top spot last year.

BT scored 94% in the report, for its ‘all-encompassing climate change risk assessment’. BT’s science based approach to target setting helps it determine the level of emissions reductions necessary within the business’s scope to combat climate change. M&S achieved an overall score of 93%.

In the report, published by consultants Carbon Clear, both BT an M&S outscored all other companies by more than 10% in regards to implementing and reporting on their carbon management and greenhouse gas reduction plans.

Carbon Clear’s chief executive Mark Chadwick said: “It’s encouraging to see some companies making good progress in their efforts to tackle climate change. These are the real ‘game-changers’ who go above and beyond in terms of carbon management. However, what is clear from our report is that much more needs to be done and sooner rather than later.

“The UK’s FTSE 100 companies possess considerable resources in terms of financial strength, operations and employees, putting them in a powerful position to influence how others respond to climate change issues. Today’s report shows those businesses that are ‘walking the talk’; while highlighting other companies which barely go beyond minimum legal reporting requirements.”

Making up the top 10 were Sky, Kingfisher, Unilever, Aviva, Centrica, Coca-Cola, TUI AG and Reed Elsevier - scoring between 84 and 73%. Yet, the overall scores of the top 10 are 6% lower than scores in 2011. Carbon Clear adjusts the scoring criteria on a yearly basis to reflect what businesses need to do to reach the 80% reduction of GHG emissions by 2050 set against the 1990 baseline. 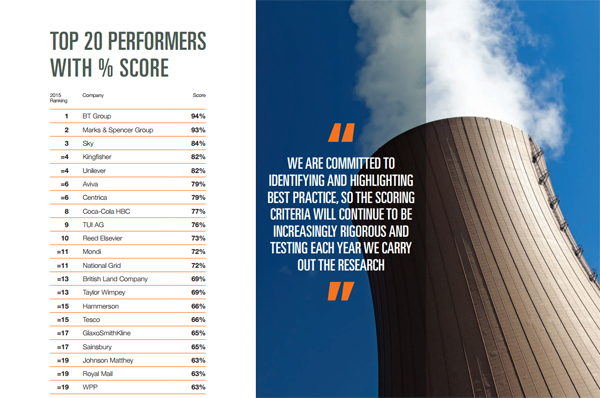 In contrast, the bottom 10’s scores remain the same suggesting that while even the lowest scoring companies are making improvements, more needs to be done to bridge the gap between progress and targets.

For the first time in its five year history, the report provides an overall analysis of business sectors as well as individual companies. The report found that despite financial institutions making up 20% of the FTSE100 only 60% of these companies are setting carbon reduction targets; with 30% acknowledging the risk of future climate change to their business. 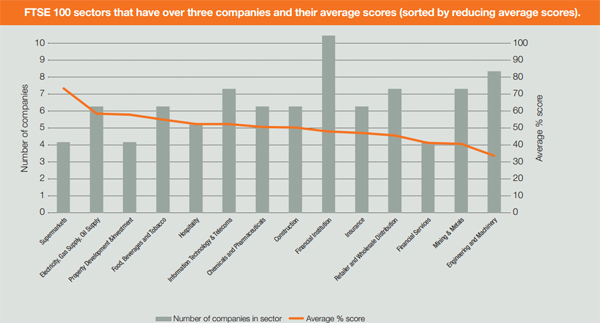 BT’s score is reflected by the company’s carbon-cutting initiatives. In 2014, the company announced it had slashed operational carbon emissions from its global business by 25.5% as part of the Better Future programme.

M&S's ‘game-changer’ status is largely thanks to its environmental ‘Plan A’ which has seen carbon emissions fall by 19% and has helped the firm become carbon-neutral across its worldwide operations. The company has also joined the RE100 commitment to 100% renewable energy.