British Airway has ranked last in a new analysis of the fuel efficiency of the 20 largest airlines that fly transatlantic routes.

According to the research from the International Council on Clean Transportation (ICCT), British Airways burns approximately 51% more fuel per passenger than the most efficient airline, Norwegian Air Shuttle.

The ICCT said that the most important factors affecting efficiency were seating configuration and aircraft fuel burn (i.e., fuel economy of the aircraft operated). Together they account for about 80% of the variation in fuel efficiency among the airlines studied.

The impact of premium seating on emissions is substantial: first class and business seats accounted for only 14% of available seat kilometers flown on transatlantic routes but approximately one-third of total carbon emissions.

“It’s surprising to see such large differences in fuel efficiency among airlines on longhaul flights over the Atlantic,” said the ICCT's program director for aviation, Dan Rutherford.

“The airline you fly, and the aircraft they choose to operate, really matters if you’re concerned about the climate."

Figure 1: Average overall fuel efficiency of the top 20 airlines on transatlantic routes in 2014 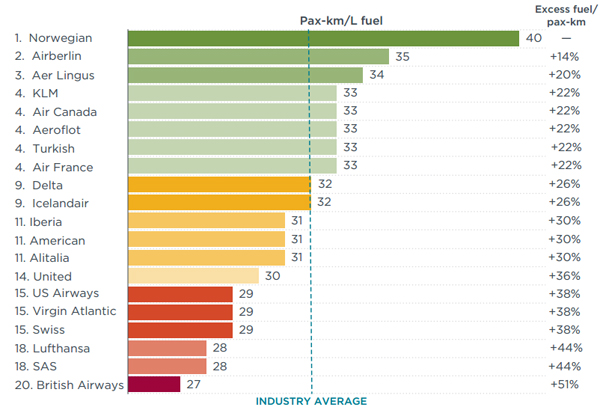 To Fly To Serve

“Our carbon emissions performance continues to improve with the introduction of new, more fuel efficient aircraft."

The company said it already operated 12 of the fuel-efficient Airbus A380s, with a further 18 to come. British Airways has improved its carbon efficiency by 10% between 2005 and 2014 and says it is on track hit a 25% improvement target by 2025.

A spokesman added: “We have also developed innovative operational procedures which have been adopted by other carriers to increase fuel efficiency.

“A better approach to the research would have been to look at airlines' global operations rather than segment one region.”

Sustainable transport group Transport & Environment said the report highlighted the need for new standards to be set for the aviation industry at COP21 in Paris.

“The failure of highly profitable carriers to invest in more fuel-efficient planes on one of the most lucrative routes in the world is a clear sign that efficiency standards and carbon pricing are needed,” said a spokesperson.

On current trajectory, aviation emissions are on pace to triple by 2050—a period in which many developed countries hope to reduce their emissions by up to 80%.

If global aviation were a country, it would rank 21st in terms of GDP, but 7th in terms of CO2 emissions, just behind Germany and well ahead of South Korea.

One of the issues due to be discussed at COP21 is how to incorporate greenhouse gas emissions from international aviation into a global climate protection framework.