Carbon capture and storage (CCS) is the best way to decarbonise British industry, according to a new report from the influential Green Alliance think-tank.

Released on Wednesday, the report argued the Government should invest in large-scale CCS clusters as the most efficient way of reducing emissions.

"To decarbonise industry, CCS is the only choice," said report author Dustin Benton.

CCS could prevent as much as 90% of the CO2 released from industrial processes from being released into the atmosphere. Emissions can be stored in deep geological formations or deep ocean water.

In the UK, CCS is "five years behind schedule" according to the Green Alliance, but there are two demonstration projects expected to start construction toward the end of 2015, if approved by new ministers.

However as experimental projects, the cost per tonne of avoided CO2 could be as much as £250, making nuclear and renewables more attractive options for decarbonisation.

This is a problem according to Benton, because CCS is the only currently feasible option to cut the emissions of many energy-intensive industries.

The Green Alliance proposes a strategy of "industrial CCS clusters", which could reportedly could cut the cost of CCS by nearly two thirds and increase the amount of carbon captured by nearly nine times.

However the upfront costs are vast: the proposed White Rose CCS plant in the Humber is projected to cost £5m, while the cluster in the same area would cost aroud £20bn. 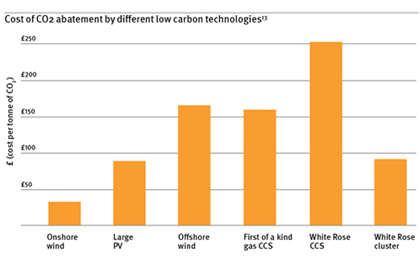 The Green Alliance argues that this cost is acceptable, and indeed, comparable to other options like offshore wind farms and the Hinkley nuclear plant.

"Our conclusion is that government should raise its bets: spending more on CCS looks very likely to reduce the cost of decarbonisation," said the report.

The development of CCS has been controversial, with cynics suggesting it is merely glossing over the the problem itself: the production of harmful emissions. Less than a quarter of people support CCS in the UK, compared to the 80 % supporting renewables.

In an exclusive interview with edie on Monday, Green Party MP Caroline Lucas said: "I worry about CCS in Europe because I think that essentially it will delay the transition that we need to make to a sustainable energy source.

"With CCS your still not clear about leakage issues, or even the technology itself, it has still yet to be properly proved.

"I would prefer to see resources going into tried and tested green energy sources. Let's get them up to commercial speed rather than necessarily hoping that CCS will dig us out of a problem."

Poll: Have your say