Half of the official fuel efficiency gains made by carmakers since EU laws were adopted in 2008 are 'hot air' as the gap between manufacturers' claims about fuel efficiency and real-world consumption continues to widen.

The 'Mind the Gap' report, which analysed fuel consumption by motorists, highlights the 'abuses' made by car manufacturers of current obsulete tests and the 'failure' of EU regulators to close loopholes.

Shockingly, it reveals the gap between carmakers' claims about fuel efficiency and real-world fuel consumption has widened from an 8% difference in 2001, to 31% in 2013. T&E suggests this is because carmakers can produce specially-prepared prototype vehicles for the obsulete test and pay testing services to help them optimise the results.

Manufacturers also allegedly use a technique known as 'cycle-beating', where modern engine management systems are able to detect when a test is being carried out and deliver better fuel-efficiency results.

Companies named in the report include Hyundai and Ford - both of which have recently had to reimburse customers for incorrect fuel economy figures - along with Mercedes and BMW-Mini - who have also been caught and are awaiting sanctions to be imposed.

T&E argues that the growing gap between tests and real-world performance is damaging the climate goals of the European Union (EU) and without the new Worldwide Harmonised Light Vehicles Test Procedure (WLTP), due to be implemented in 2017, the average gap could increase to more than 50% by 2020, with additional cumulative CO2 emissions estimated at approximately 1.5b billion tonnes.

"Unless Europe introduces the new global test in 2017 as planned, carmakers will continue to cheat laws designed to improve fuel efficiency and emissions reductions. The cost will be borne by drivers who will pay an additional €5,600 for fuel over the lifetime of the car compared to the official test result." 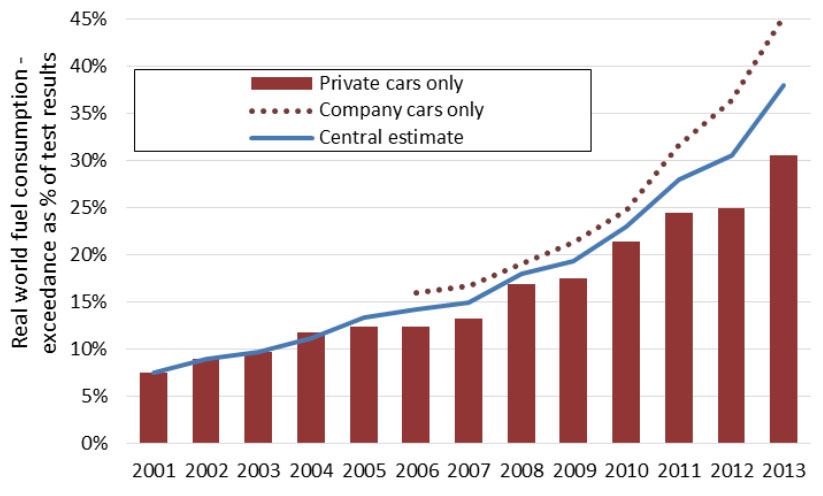 Cars are currently the largest source of CO2 emissions in the transport sector; responsible for 15% of the total emissions in Europe. The EU's first obligatory rules on CO2 emissions require car manufacturers to limit their average car to a maximum of 130g of CO2 per km by 2015, and 95g by 2021.

Archer concluded: "The US has shown how to provide accurate consumer information and limit the abuse of official tests by carmakers through effective market surveillance by an independent regulator.

"In contrast, the EU system allows carmakers to pay testing authorities to test prototypes in their own laboratories using an obsolete test. The results are distorted fuel economy figures, more climate-changing emissions and air pollution. If the new European Commission doesn't strengthen the system of car testing, the only place cars will be less polluting is in the laboratory."

The Low Carbon Vehicle Partnership (LowCVP) is a public-private partnership that exists to accelerate a sustainable shift to low carbon vehicles and fuels in the UK.

LowCVP managing director Andy Eastlake said: "The LowCVP has championed the development of more representative test cycles for all vehicle types to give better information to vehicle purchasers and users, as well as policy makers. There is, though, a great deal to be done to fully implement this in practical and policy terms.

"It should be noted that driving style has a significant impact on fuel consumption, regardless of the test cycle."

Earlier this month, edie reported that the US Environmental Protection Agency (EPA) and the US Department of Justice had announced a settlement with carmakers Hyundai and Kia to pay $100m civil penalty after they allegedly breached the Clean Air Act.