Europe's energy-intensive industries such as cement and steel are in 'urgent need' of innovative carbon capture and storage (CCS) technology if they are to reach EU-wide emission targets by 2050, a new report has found.

The report, developed over several years by researchers at Chalmers University of Technologyin Sweden, concludes that there is the potential to reduce emissions by between 60%-75% from large industry sources if the full potential of emerging CCS technologies was realised and implemented; a target that is in line with the emissions targets set for 2050.

Researcher Johan Rootzén said: “There is an urgent need to demonstrate and implement carbon capture and storage, CCS, and other carbon dioxide mitigation technologies. While this will involve major investments in primary production, our results suggest that there will only be marginal impacts on costs and prices in the end-use sectors.”

“There is a lack of strategy from political actors about how emissions from [energy-intensive] industries should be reduced, even though these industries are responsible for a tenth of emissions of carbon dioxide in Europe and nearly 20% in Sweden. At the same time Sweden and the EU have a target in which emissions should be almost zero by 2050.”

The thesis warns of a 'ticking clock' for these industries due to the plants’ long life span and the drawn out time it takes to introduce new technology. Rootzén warns that there is only “a few investment cycles left” before 2050. The continued high demand for bulk products like cement and steel means that the sector needs to find new ways to cut back on emissions without stifling production. 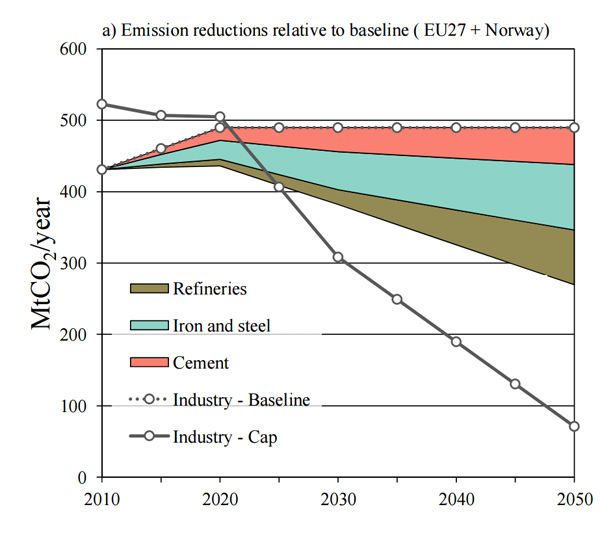 The researchers have called for the establishment of a large-scale demonstration of the entire CCS chain from capture to storage, a move that would only have a ‘marginal effect’ on the final price of end-products such as cars or buildings.

Professor Filip Johnsson who has been leading the research said: “It is easy to say that we should achieve zero emissions, but this requires that we take the issues seriously and are given the opportunity to demonstrate new technologies; CCS as well as other mitigation options.

“There are indeed question marks concerning CCS, and large investments are required in CCS as well as in other measures. Our research suggests that without a shift in technology then refineries, steel and cement industries alone are going to be the source of up to a quarter of the emissions in 2050.”

The UK Government has reiterated its support for the implementation of CCS despite energy giant Drax pulling out of a consortium to build the White Rose CCS project in Yorkshire.

The UK has also made the potential sites for carbon storage projects freely available to the public in an attempt to encourage more companies to invest in CCS by reducing initial costs and making information more readily available.