China's coal consumption fell for the first time in 2014 due to a rapid increase in renewable generation capacity, energy efficiency improvements and a shift away from heavy industry.

Coal consumption growth in China has been responsible for more than half of global CO2 emission growth in the past 10 years, but growth has been slowing and has decoupled from economic growth since 2012. This is according to a new projection from China's National Coal Association and recent energy and economic statistics.

Seperate analysis by Greenpeace suggests that if China was to fully implement its energy targets then the peak in coal use could happen before 2020. Greenpeace is calling for this to be made an official target in China's Five Year Plan for 2016-2020.

Fang Yuan, spokesperson at Greenpeace East Asia, said:"The fact that China's coal consumption finally starts to decouple from its GDP growth shows that a peak in coal use is within reach. With political determination on an energy revolution, and strong targets and measures, the peak can be realised well before 2020.

"This is not only critical for China to win the battle against air pollution, but will also speed us towards a global CO2 emissions peak."

As part of a deal struck by China with the United States in November 2014 on emissions reductions, China pledged to cap its greenhouse gas emissions by 2030, or earlier if possible. It recently required four key economic provinces which together consume over 600 million tons of coal per year, to set absolute coal consumption targets. This has resulted in a slump in coal imports of 35.8 million tons and is seen as a clear step up by China in terms of accountability and ambition by China in tackling air pollution.

The secretly-negotiated deal to reduce their greenhouse gas outputs between China and the US was an important boost to efforts to reach a global deal on reducing emissions beyond 2020 at a United Nations meeting in Paris next year. The United States has pledged to cut its emissions to 26-28% below 2005 levels by 2025.

China also promised to increase its use of energy from zero-emission sources to 20% by 2030. In the past year, the country has achieved record increases in renewable energy by installing 20GW of grid-connected wind power capacity and 11GW of solar. Conditions for hydropower have been particularly favourable so hydropower capacity has continued to be added at a fast rate. 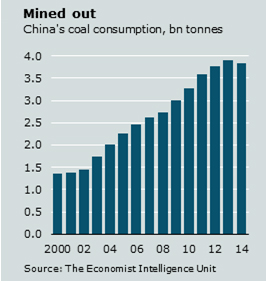 China also appears to have dramatically cut its ambitions for coal-to-gas and other coal conversion projects which were the last potential source of rapid coal demand growth, due to concerns about water impacts and economic viability.