A perfect storm of climate movements could see fossil fuel companies waste more than $2trn by pursuing projects in a potential world where there is no need for coal mines and oil prices have peaked, the Carbon Tracker Initiative has warned.

James Leaton, head of research and co-author of the report, said: “Too few energy companies recognise that they will need to reduce supply of their carbon-intensive products to avoid pushing us beyond the internationally recognised carbon budget.

The report looks at fossil fuel production to 2035 and capital investment to 2025. It found that the US look set to have $412bn fossil fuel projects listed as stranded assets in this time frame. Other countries also at economic risk include: Canada ($220bn), China ($179bn), Russia ($147bn) and Australia ($103bn). 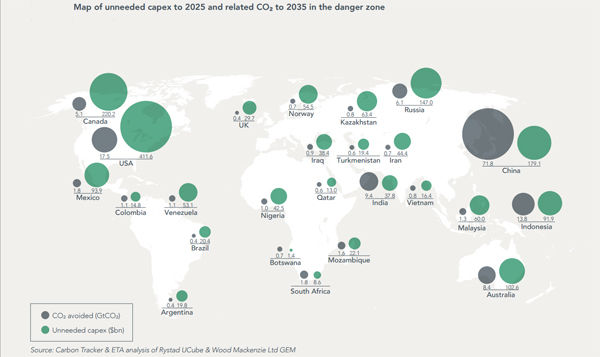 Fossil fuel companies have been told to avoid pipelined projects that would generate 156 billion tons of carbon dioxide, in order to be consistent with the carbon budget in the International Energy Agency’s 450 demand scenario, an energy pathway with a 50% chance of meeting climate change targets.

Anthony Hobley, CEO of Carbon Tracker, said: “Business history is littered with examples of incumbents who fail to see the transition coming. Fossil fuel incumbents seem intent on wasting capital trying to hold onto growth by doing what they have always done rather than embracing the energy transition and preserving value by adopting an ex-growth strategy.

"Our report offers these companies both a warning and a strategy for avoiding significant value destruction.” 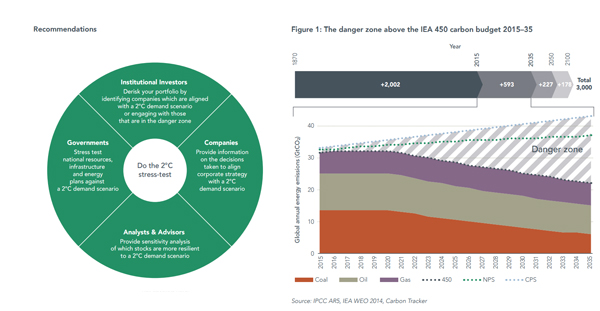 According to the Carbon Tracker report oil demand will peak around 2020 meaning the sector should already be looking at alternatives, however this is ‘inconsistent with the narrative of many companies’. Current plans to spend $1.3trn on new projects are deemed unnecessary with the report stating that 43% of investment in new projects and 33% of new supply should be avoided.

In regards to gas, growth will be ‘at a lower level than expected under a business as usual scenario’. Overall 41% of investment in new projects and 25% of new supply, accounting for 9 Gt of CO2, is unneeded.

Carbon Tracker’s analysis assumes 24Gt of CO2 will be captured by CCS by 2035, but it warns that this would require CCS to grow fifteen fold compared to todays standards. The IEA has estimated that a 10-year delay in large-scale CCS deployment could cost fossil fuel producers $1.35 trillion in lost revenues.

The report comes in the same week that major European financial institutions, including the world's largest insurer Allianz, pledged to reduce their exposure to coal investments by €865bn as they transition towards clean energy.

Bloomberg New Energy Finance has also reported that some renewables are already becoming cost-competitive with both gas-fired and coal-fired generation in the UK and Germany, once carbon costs are taken into account.