More than 60 environmentalist organisations are calling for a tax on fossil fuel extraction that would see energy giants pay compensation to countries being impacted by climate change.

The declaration states big gas and oil companies are failing to offer up what is needed to bridge the gap in climate finance.

The Carbon Levy Project declaration – signed by author Naomi Klein, 350.org’s Bill McKibben, Greenpeace’s Kumi Naidoo and the Seychelles Ambassador to the UN Ronny Jumeau – states that fossil fuel companies are accountable for around 70% of present day global warming and should duly mobilise funds for countries most affected by this change.

“Climate finance is already inadequate – with a huge gap between what is needed and what is being offered. A new source of finance from a levy on Big Oil, Coal and Gas Producers could unlock some of the objections by rich countries to including loss and damage in a new Paris agreement."

The declaration highlights that big gas and oil companies including Chevron, ExxonMobil, Saudi Aramco, BP, Gazprom and Shell have received more than $5trn in subsidies yet are failing to offer up what is needed to bridge the gap in climate finance. 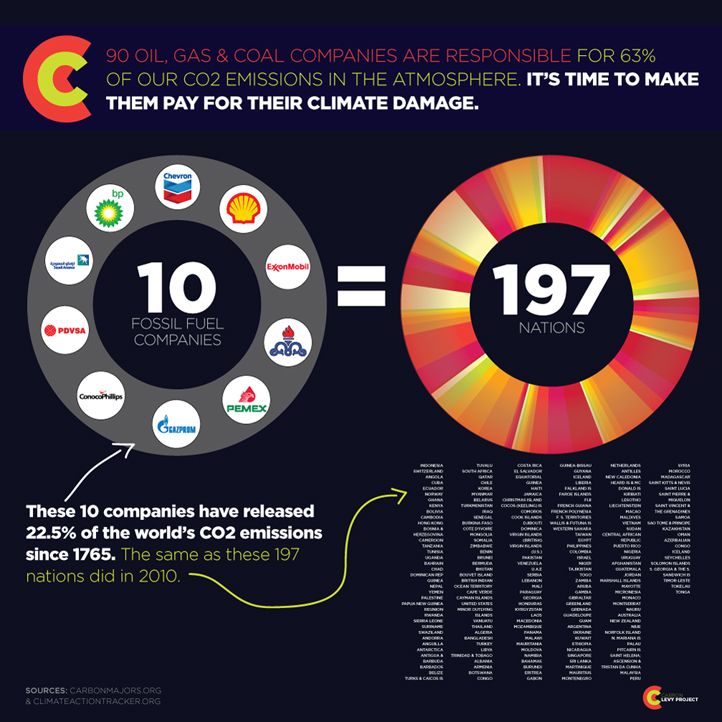 This call comes just weeks after the world momentously agreed to keep global warming to “well below 2°C” with pledges in place to reach 1.5 degrees at COP21.

The report states that even if strong mitigation and adaptation pledges are put in place, the residual cost of climate change could reach $275trn by 2200 across the globe. For Africa alone, damages could reach $100bn annually by 2050, even if global warming is limited to two degrees.

The World Resources Institute (WRI) has already warned that raising capital for climate finance is unreachable without contributions from the private sector and international development banks.

In response to this, the World Bank recently announced it would boost funding for poorer nations coping with climate change from 21% to 28% of its budget, while the European Investment Bank (EIB) will increase its climate support from 25% to 35%.

Earlier this year, finance ministers representing the 20 countries most vulnerable to the effects of climate change announced a series of financial mechanisms to invest in climate resiliency and lower emissions for those countries.