US food producer General Mills has announced that it aims to reduce its greenhouse gas emissions by 28% across the entirety of its value chain in the next 10 years.

General Mills made a commitment to sustainability, in 2013, to source its 10 priority ingredients from sustainable sources

General Mills will cut emissions from ‘farm to fork to landfill’ to achieve an overall reduction of 50-70% in emissions by 2050, the figure suggested by the Intergovernmental Panel on Climate Change (IPCC).

The company launched direct operations in 2005, putting an emphasis of reducing gas emissions. In the 10 years since the operational launch General Mills has seen gas emissions reduced by 13%. They have also invested more than $100m in energy efficiency and clean energy.

“For 150 years, General Mills has served the world by making food people love,"said Ken Powell, chairman and CEO of General Mills. "Our aim is to be around for another 150 years. We recognize that we must do our part to protect and conserve natural resources.  Our business depends on it and so does the planet.”

In order to continue with reductions and reach the 10-year target, General Mills will have to look externally to help reduce emissions. It is estimated that nearly two-thirds of the company’s greenhouse gas emissions occur in external operations from packaging and ingredients.

Ken Powell added: “We know our greatest impact is outside our four walls – particularly in agriculture, ingredients and packaging. To reduce emission levels, we must work across our value chain with growers, suppliers, customers and industry partners. Together, we will identify new solutions and promote sustainable agriculture practices that drive emission reductions.”

To combat this, General Mills made a commitment in 2013, to source its 10 priority ingredients from sustainable sources. These ingredients represent over 50% of raw ingredients used by the company.  The company will work closely with farmers and address key areas such as water management and soil quality. 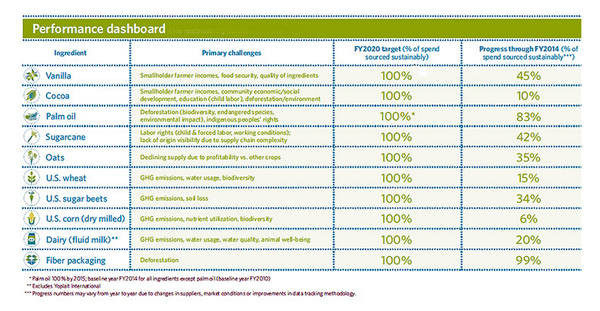 “While our success depends on our actions, we cannot get there on our own," said Powell. "We believe every company, government and individual has a role to play. Climate change is a shared, global challenge that is best addressed at scale.”