Germany's second largest utility company RWE has announced plans to separate its growing renewable energy initiatives from its conventional energy business in a drive that is expected to deliver $42bn in annual revenues.

RWE is effectively splitting the company in two as two thirds of its current 60,000 strong staff will now operate the new renewables entity

RWE is effectively splitting the company in two, as two thirds of its current 60,000 strong staff will now operate the new renewables entity, controlling 3.5 GW of renewable electricity capacity and a 550,000km long distribution network grid.

RWE’s CEO Peter Terium said: "The Group's restructuring is our response to the transformation of the European energy landscape. We are creating two viable companies under one roof. The new subsidiary will have its own access to the capital market and improve our growth prospects. 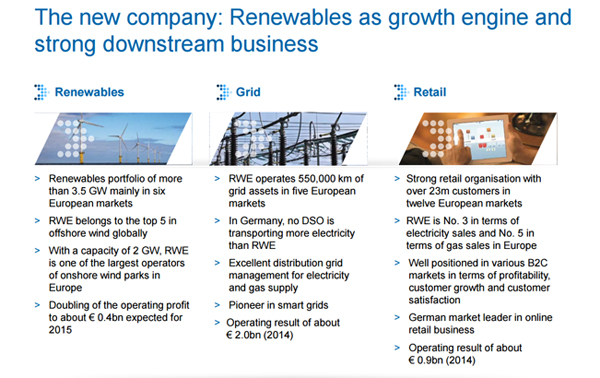 RWE’s new public entity, which will also be stationed in Essen in Germany, is set to go public in late 2016 with RWE owning 90% of the company while floating the remaining 10% to potential investors.

Conventional power methods and the use of fossil fuels will remain an integral part of RWE’s landscape. Yet the company claims that this is mainly due to potential savings from these fuels.

Peter Terium added: "Within the new structure, we will continue to bear our responsibility in the conventional energy landscape and satisfy the needs of tomorrow's energy world.”

"We will also continue to stand by our responsibilities with regards to nuclear energy. This will not be affected by the new structure. On the contrary, the shares of the new subsidiary will be an asset that will make it easier for us to fund provisions in the future if necessary, whatever the circumstances."

RWE joins fellow German energy company E.ON in officially branching out into renewables. Last year the company announced that a spinoff company Uniper, will focus on conventional energy while E.ON concentrates on renewables. This resulted in the construction of the world's first modular large-scale battery in the German town of Aachen.

More recently Norweigan firm Statoil and American firm ExxonMobil have announced new research partnerships with universities in a bid to accelerate progress towards the 'sustainable fuels of the future'.