David Cameron has praised the positive impact of the UK Green Investment Bank (GIB), which has ploughed more than £5bn worth of investment in 37 green energy investment projects across the country since its inception two years ago.

Business Secretary Vince Cable and the GIB's chief executive Shaun Kingsbury were, of course, proud of the Bank's achievements to date

The Prime Minister was among a number of politicians, leading investors and NGOs that have all hailed the successes of the Government-backed initiative, which has so far mobilised £3 of private capital for every £1 it's invested in projects that deliver a positive environmental impact.

"Under this Government, as part of our long-term economic plan to back business, create more jobs and secure a brighter future for Britain, we have become one of the best places for green investment anywhere in the world - and the Green Investment Bank has played an instrumental role in this," said Cameron.

"Their achievements tell their own story - in just two years, getting 37 green infrastructure projects underway in the UK, committing more than £1.6bn of capital and mobilising a total of £5.2bn, and creating thousands of jobs."

Supported by £3.8bn of public capital, the GIB was launched in October 2012 with a mission to accelerate investment in UK green energy infrastructure. Since then, the Bank has committed to 37 new projects, with £1.6bn of its own capital.

The 37th project was unveiled at an anniversary event in London yesterday (30 October), with the announcement of a £5.2m transaction to help global bank Citi reduce energy use at its data centre in Lewisham, London.

Speaking at the anniversary event, Business Secretary Vince Cable said: "Government action was necessary to jump start investment in cleaner, greener technology and the bank is delivering. GIB's expertise has given investors the confidence to back projects that simply would not have happened without it.

"The Green Investment Bank is at the heart of our industrial strategy to create sustainable jobs and growth." 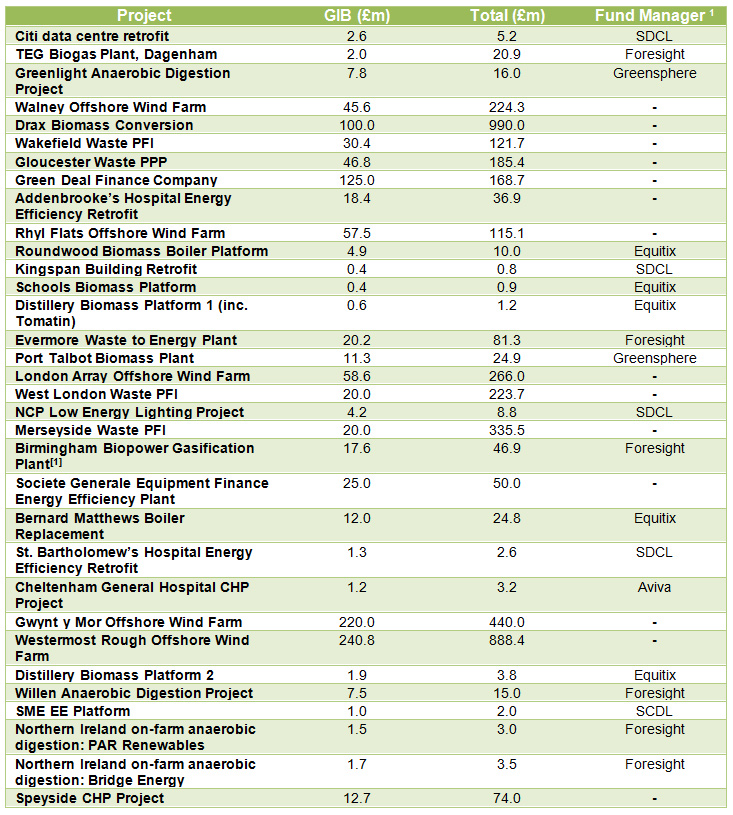 The GIB's chief executive Shaun Kingsbury added: "We have set out to be an innovative but always commercial investor. All of our investments have been both green and profitable but, more than that, each deal demonstrates to a significant international market that the UK renewables sector is a good place to invest.

"Two years ago, nobody could say with any certainty that the idea of a green investment bank would work. I believe we have proven the case and, in doing so, made a real, lasting contribution to the UK's energy security, lowering the costs of renewable energy and cutting the UK's carbon emissions."

The Green Investment Banks' current investments are expected to deliver an annual return of 9% and the organization expects to make an annual operating profit in excess of £10m per annum once all of its investments are operational.

Other 'green' achievements for the GIB include:

This initiative is now being imitated internationally, with the GIB having set up an international network of green banks to support the growth of this new type of business.