The UK green economy generated £46.2bn turnover through the efforts of 238,500 full-time equivalent (FTE) workers in almost 100,000 low-carbon and renewable energy (LCRE) companies in 2014, a report from the Office for National Statistics (ONS) has revealed.

Low-carbon electricity groups such as offshore and onshore wind generated around £12.4 billion turnover in 2014

The ONS's LCRE Economy Survey provides a comprehensive summary of the impact of the green economy in the UK, presenting estimates for the UK overall and specific industries.

Across the UK, the greatest proportion of business engagement in LCRE activities was highest north of the border, with 5.2% of Scottish non-financial businesses operating in the LCRE economy in 2014. LCRE activities generated £5.6bn turnover and employed 21,500 FTE employees in Scotland. Turnover of £37.6bn was generated by 83,000 business in England, accounting for 1.2% of all non-financial turnover produced.

Low-carbon electricity groups, which include offshore and onshore wind, solar photovoltaic (PV), hydropower and alternative fuels industries, were some of the largest contributors to the LCRE economy. Overall, the group generated around £12.4bn turnover and employed 40,500 FTE employees in 2014. 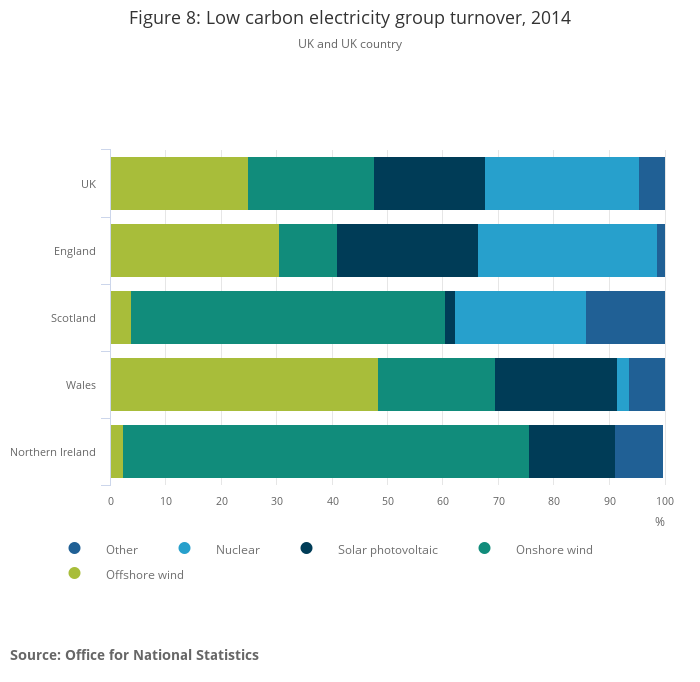 Commenting on the findings, trade association RenewableUK’s deputy chief executive Maf Smith said: "With more than 40,000 people employed and a turnover of more than £12bn a year, we are bringing power and prosperity to communities across the UK, and wind energy is delivering 50% of this investment. Government has decided that in future our electricity will come from gas, nuclear and renewables but not coal, and these figures show that renewables are delivering."

The ONS research comes after a new report from supplier SmartestEnergy revealed that on-site energy generation projects across the UK have more than doubled in the past four years, with businesses producing almost £100m worth of electricity in 2015 alone.

A total of £5.9m turnover was generated through LCRE imports and the UK green economy benefited from £4.8m worth of exports. The low-emissions vehicle group dominated in the exports sector, accounting for 60.4% of total LCRE exports, the equivalent to £2.9bn. This follows on from the UK’s Society of Motor Manufacturers and Traders (SMMT) announcement earlier this year that sales of alternatively-fuelled vehicles (AFVs) rose more than 40% in the UK last year, gaining a largest ever market share of 2.8%. 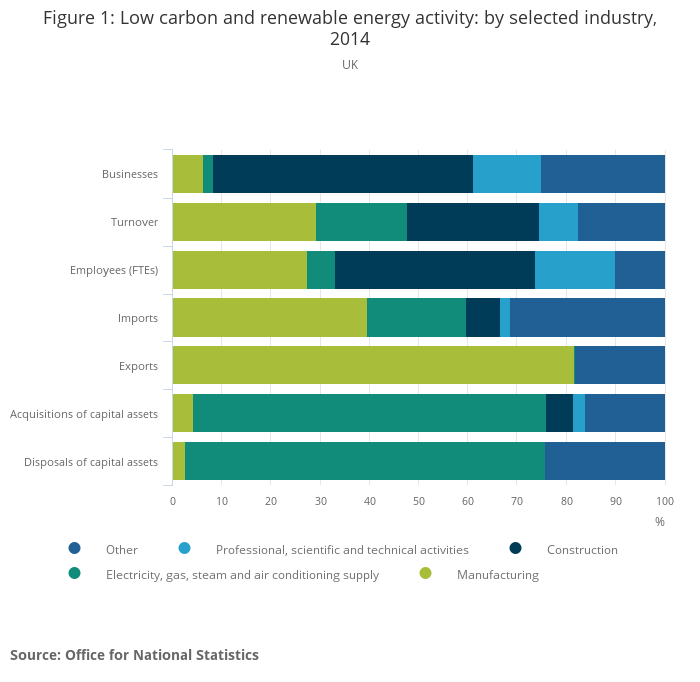 The construction industry has recently been at the forefront of sustainable development through a variety of innovative initiatives.

Earlier this month, the Berkeley Group pledged to defy a lack of green policy support for the construction industry by leading a new sustainability movement, with a landmark plan to become Britain's first carbon-positive housebuilder.

Meanwhile, building materials supplier Hanson UK is pioneering a demand-side response approach to energy management, with the technology being rolled out to 29 of the company's quarries across the country. And Carillion has confirmed that it added an additional £33.8m to its overall profits last year, thanks to an increased focus on sustainable business practices, according to its latest CSR report.

Last month, it was revealed that a technological innovation will enable UK cement and lime industries to significantly reduce their environmental footprint through carbon capture and storage (CCS).

The sustainability credentials and potential of the construction industry is discussed in depth in edie’s brand new Sustanable Business Covered podcast, which provides the latest news, insights and inspiration from the world of green business.

You can listen to Sustainable Business Covered: Episode 1 for free below...