The UK is on track to miss legally binding targets on low-carbon heat, according to a report released Wednesday by the Policy Connect think-tank.

Heat is one of three sectors that make up the UK’s binding commitment to decarbonize the energy industry by 2020. The target is for 12% of the UK’s heat to come from low-carbon or renewable sources. If this is unmet, the other two sectors, transport and electricity must contribute more to meet the overall target.

The report, The Policy for Heat - Transforming the System, calls for an extension of the government’s Renewable Heat Incentive (RHI).

The RHI budget runs out April 2016, and its future is expected to be announced in the government’s Comprehensive Spending Review (CSR) on the 25th of November.

The Renewable Energy Association, the largest renewables trade body in the UK has welcomed the findings of the report.

James Court, head of policy and external affairs with the REA, said: “With the conclusions of this report, the government is sent a clear message; it can no longer muddle along in low carbon heat. There are clear targets, there are simple recommendations, and not meeting the targets has serious consequences for other sectors of the economy.

“At present we are not on track to meet our binding targets and the government is actively sending the wrong signals to investors and consumers across the country with uncertainty over the RHI budget.”

Heat accounts for nearly half of the energy consumed in the UK and a third of carbon emissions. If the 12% target isn’t met, the report states that other markets, notably the electric and transport markets will have to increase measures to lower its carbon footprint as a result.

Fuel of the future

According to the report biomass could hold the key to the low carbon transition. It has been identified as the leading source of the UK’s renewable heat sector. However in order to reach its potential it will need the aid of the Renewable Heat Incentive (RHI), the future of which will be announced in a Comprehensive Spending Review (CSR) on 25 November.

Frank Aaskov, policy analyst with the REA, said: “Biomass is correctly identified here as not only the leading source of the UK’s renewable heat, but as a versatile and sustainable source of heat. It is widely available today and can deliver significant GHG savings. Biomethane is also emerging as critical to decarbonizing the gas grid. Despite its success of biomass in particular, other sectors need to be encouraged.

The report comes alongside the latest issue of the UK Energy Efficiency Trends report from EEVS and Bloomberg New Energy Finance. The report shows confidence in the Government’s energy policies has slumped by 180 points to an all-time low.

Suppliers cited regulation and lack of subsidy and policy support as reasons for the vote of no-confidence. However energy efficiency consumer respondents reported an increase in project commissioning in Q2. 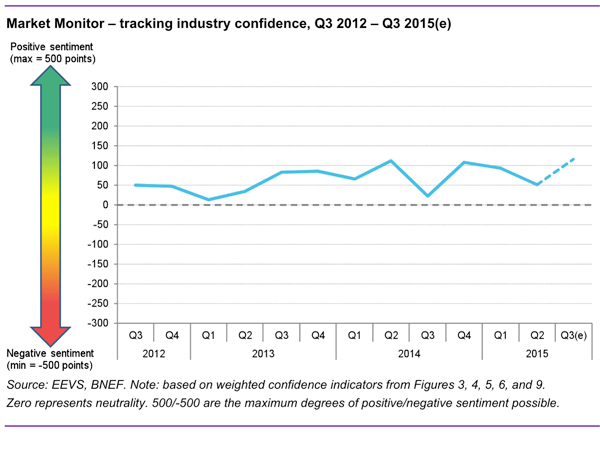 Ian Jeffries at EEVS commented: "A notable theme in this quarter's research has been the lack of support that the energy efficiency sector feels it has received from the UK government. Interestingly, however, the policy landscape has shifted somewhat since the survey was carried out.

"Allied to this, there is increasing political optimism that the upcoming COP21 negotiations in Paris will yield a new global climate agreement.”