EXCLUSIVE: Increased tuition fees and competition among UK universities have created a generation of evermore demanding students which is complicating the sector's attempts to reduce emissions.

Aston University has seen its emissions reductions slow down since 2012

That's the view of Andrew Bryers, energy manager at Aston University - which was recently rated as one of the most sustainable higher education establishments in the UK.

Speaking exclusively to edie, Bryers believes the trebling of student fees - introduced by the previous UK Government - is one of many factors that are hampering the sector's attempts to reduce its environmental footprint, but that effective behaviour change programmes could now pick up the shortfall.

"One issue we've seen in the past few years, with the fee hike and increased competition, is that students expect more, and there is pressure on the university to deliver," Bryers said. "If a student wants their heating on 24/7, that's what they get. If they want to be in their shorts in the library at 2am in midwinter, then that's what's going to happen.

"There is more pressure to have more resources available, such as separate postgraduate areas open to students 24/7; more laptop charging points; more energy-intensive lab equipment and we face more pressure to heat halls of residence to a higher temperature." 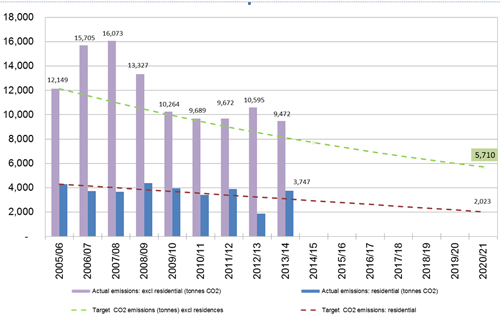 But Bryers believes that his extensive behaviour change program can get the university back on track. One of his flagship policies is the planned devolution of energy budgets to individual schools, intended to increase accountability.

"Currently the departments get their energy paid for out of the main budget, without restrictions, but from September 2016 we are going to allocate individual budgets based on their energy use last year," said Bryers.

"That way they have an incentive to cut energy use - any surplus can be spent elsewhere, while if they go over budget, the department will have to find that money from other parts of their allowance."

"This has the added bonus of getting the academics on-board, because traditionally they don't really consider energy use. Their research is their priority, but we hope this could bring more of a focus to energy consumption."

Aston's energy, environment and sustainability teams have also upped the amount of 'Green Champions' around the university to around 100, from 15 two years ago. These Champions - generally someone who is environmentally-minded - encourage green behaviours and practices and keep staff and students accountable.

Energy consumption is also recorded and published in a department league table allowing for "naming and shaming," as Bryers puts it. "Those tables generate a lot of conversation," he said "It's part-stick, part-carrot".

His advice to anyone looking to implement behaviour change schemes of their own is to "keep it fun".

"We have all sorts of event, from a bike-maintenance day, to planned switch-offs, which help keep students and staff interested. It's also important that we keep updating our targets and aims for our Green Champions. They're not going to be engaged and effective if they're not interested."

Behaviour change could save UK businesses up to £500m a year, according to a recent study, and the practice was identified by energy managers as their second top priority in edie's own survey.

UK retailer M&S recently launched an ambitious employee engagement programme, announced shortly after news emerged that Sainsburys claimed to have cut total energy use by 3% with their own programmes.

Andrew Bryers is speaking at the 2015 Energy Managers forum in Birmingham on 20 May. He will be presenting a case study of his own experiences titled: "A leading example of staff engagement in energy efficiency". Click here for more details and to register.