The world's biggest furniture retailer on track to achieve many of its ambitions 2020 sustainability targets with significant increases in its use of renewable energy, sales of sustainable life products and sustainable sourcing.

Ikea's 2014 sustainability report, released today (28 January), outlines the progress the Swedish company has made towards its end goal of becoming 'completely sustainable' but also highlights areas that will require rapid improvements to meet its ambitious  100% targets.

"If we are to continue to grow and be successful in the long-term, it is essential that we work within the limits of the planet," said Ikea Group's president and chief executive Peter Agnefjäll. "This is why sustainability is an integral part of our business strategy.

"We want to make IKEA completely sustainable which is why we go all-in with 100% targets. When you go all-in, it creates transformational change."

Ikea installed 150,000 solar panels in the last year - taking its total to 700,000 - and committed to owning and operating a further 87 wind turbines on top of the 224 it already has. This has brought the flatpack furniture giant closer to achieving its goal of producing more renewable energy than the total energy it uses by 2020.

In the fiscal year 2014, Ikea produced 1,810GWh of renewable energy - a 27% increase on the amount produced in 2013. And the company has committed to investing a further €1.5bn in renewable generation by the end of 2015. 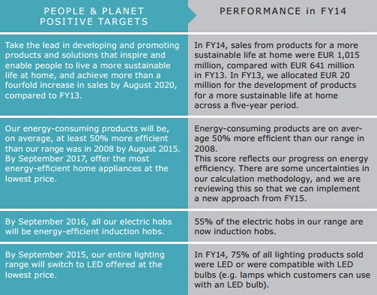 The sales total of products designed 'for a more sustainable life at home' reached €1,015m, a 58% increase on that achieved in fiscal year 2013. Ikea aims to achieve a fourfold increase in sales by August 2020, compared to 2013.

These 'democratically designed' products aim to reduce customers' energy and water use, reduce waste and help them live healthier lives. Ikea has already achieved its energy efficiency target and is making significant progress towards a complete switch over to energy efficient induction hobs and LED lighting.

"I'm very proud of our People & Planet Positive strategy. While we have achieved a lot, we still have a long way to go. As we move forward we will share our plans, successes and challenges." Agnefjäll said.

While Ikea has made impressive progress on its ambitious sustainability strategy, rapid increases will be needed to be made for it to achieve many of its targets.

Another target the company appears to be falling short of is sustainable palm oil. By the end of this year, all of the palm oil used in Ikea products must be from segregated certified sources, but the company has currently only achieved 32%.