Kia will attempt to improve average fuel efficiency by 25%

During that same time period, Kia plans to introduce a range of partially-autonomous driving technologies to its model line-up, with plans to bring its first fully-autonomous car to market by 2030.

Kia Motors senior vice president of the eco-friendly vehicle R&D centre, Ki-Sang Lee, said: “We don’t believe that there is any one ‘silver bullet’ that can satisfy the demand for low emission technology within the car industry, so we foresee a wide range of eco-friendly powertrains co-existing for an extended period of time.

The new range of ultra low emission models - rising from four to 11 - will include the new Kia Optima PHEV (plug-in hybrid electric vehicle), which will feature a high-capacity lithium-polymer battery pack and electric motor. Other models such as the Niro hybrid utility vehicle (HUV) will target CO2 emissions of 90 g/km.

As part of the roadmap, Kia also wants to introduce the construction of facilities designed to reduce CO2 output in the manufacturing stage of production. Other initiatives include mass production of an all-new hydrogen fuel cell vehicle which is 5% more efficient and has a targeted range of more than 800 km from a single fill-up and a top speed of around 106 mph. 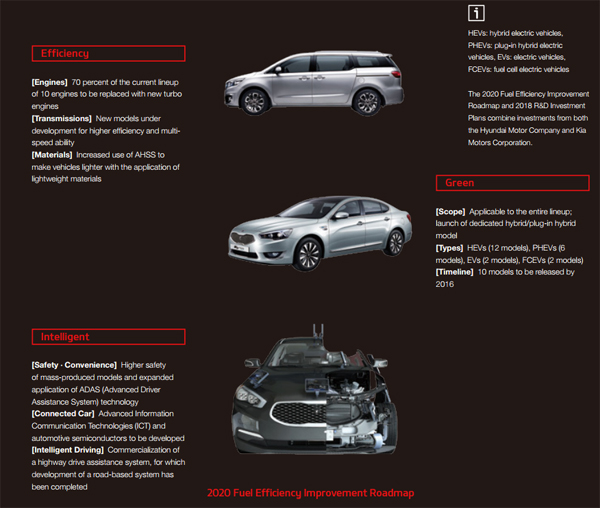 The overall R&D investment, which will develop, highly-efficient powertrain and smart car technology is expected to create more than 7,300 new jobs over the next four years.

Carmakers have taken significant steps to distance themselves from the Volkswagen emissions scandal earlier this year, with zero-emissions pledges and new sustainability plans afoot as the industry tries to cut away at worrying emission levels.

Last month, Japanese carmaker Nissan unveiled what it called 'the future of autonomous driving and zero emissions' - a self-driving electric vehicle (EV) which generates zero emissions and minimises the potential for road accidents.

Germany's Audi, meanwhile, has unveiled concept designs for its first all-electric SUV. And Swedish carmaker Volvo has announced a comprehensive electrification strategy which will see plug-in hybrids introduced across its entire range.