Poll: Britons could switch vote based on climate change

Nearly 60% of British adults want to see their favoured political party make a 'strong statement' on climate change ahead of May's General Election, according to a ComRes poll released today.

And that environmental support is not just empty bluster, with more than a quarter of respondents saying they would not vote for their favoured party if it did not have a strong policy on climate change.

The online poll surveyed a representative sample of 2,100 British adults over four days at the start of February.

And the results reveal an interesting political divide, with respondents who intended to vote Conservative showing the least concern about the environment, with 79% agreeing that they would vote Conservative regardless of climate policy. This compares to 67% for Labour and 57% for the Liberal Democrats.

The divide among voters appears to be representative of the parties themselves, as Labour succesfully amended the Infrastructure Bill last month to ban fracking in national parks and near vital underground water stores. By contrast David Cameron and George Osborne have proclaimed themselves to be 'going all out for shale' despite environmental protests. 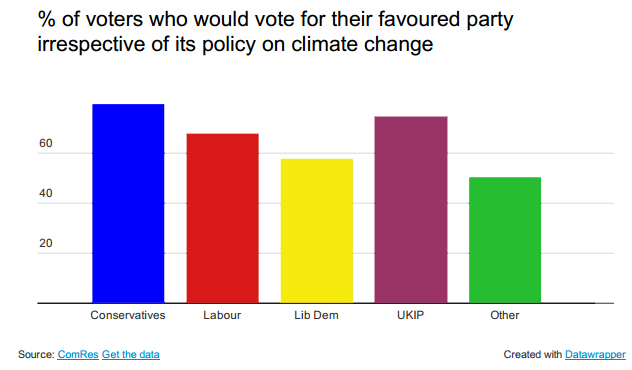 Ahead of the Geneva climate talks which kicked off on Sunday, the ComRes poll revealed a broad consensus for UK leadership on climate change, with 66% agreeing that British politicians should lead by example on the international stage.

However, that desire for UK leadership appeared to diminish with age, falling from 74% among 18-24 year olds to 60% in the 65+ category.

The lastest results correlate closely with a Populous poll conducted last November, which found that 73% of Britons wanted to see a global deal on climate change established by Paris 2015.

The survey revealed a disparity between the sexes, with 68% of women saying they were concerned about climate change, compared to just 57% of men.

It also offered up some useful data for the Valentine's Day daters: