The system, designed by British company ITM Power, has reportedly been measured at an overall energy efficiency of 86%

This hydrogen can then be stored within the natural gas network and converted back into electricity when needed. The waste heat from the electrolyser is also utilised via a connection with the local district heating network.

The system, designed by British company ITM Power, has reportedly been measured at an overall energy efficiency of 86%.

RWE Germany CTO Dr Joachim Schneider said: “The benefit of this form of electricity storage is the enormous infrastructure already offered by the natural gas network, which has huge storage capacity and a high-performing network.

“But that is not all – with a utilisation rate of 86%, this power-to-gas plant is the most efficient of its kind in Germany”.

The construction of the power-to-gas storage plant could mark the beginnings of a philosophical turnaround from RWE, which has seen slumping profits and activist campaigns against its involvement in the coal industry in recent months.

Investment analysts suggested the company could be best served by copying fellow German energy company E.ON and splitting into two business units, one with a focus on renewable energy and other clean technologies. 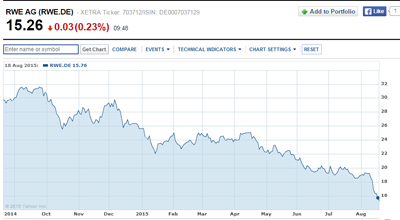 RWE Germany CEO Dr Arndt Neuhaus said that energy storage projects like RWE's new plant would be vital to meeting German Government targets to source 50% of electricity from renewables within the next 15 years.

Long-term, the German Government has targeted an energy transition – energiewende – to a 100% renewable grid.

“Our electricity grid will have to perform at an even higher level than before to achieve this,” said Neuhaus. “Under these changed conditions, the power-to-gas technology will be an exemplary solution, as it makes it possible for us to respond immediately to fluctuating volumes of incoming power”.

Without energy storage, it is expected that Germany will be unable to use around 38 TWh of electricity that it will be generating from renewable energy sources by the year 2050, simply thanks to imbalances in supply and demand.

So far, pumped hydro storage has proven the most popular solution, but large-scale battery storage is also on the rise. Just last week E.ON started the construction of a giant modular battery in Aachen, while German car company Daimler-Benz has also started producing storage batteries for homes and businesses.