Onshore wind is now fully cost-competitive with both gas-fired and coal-fired generation in the UK and Germany, once carbon costs are taken into account.

That's according to new research published today (6 October) by Bloomberg New Energy Finance (BNEF), which reveals that world's the two most prominant renewable technologies - onshore wind and solar - have seen average costs per Mwh fall in the second half of 2015, as the costs of gas and coal fire generation continue to rise.

BNEF's head of Europe, Middle East and Africa Seb Henbest said: "Our report shows wind and solar power continuing to get cheaper in 2015, helped by cheaper technology but also by lower finance costs. Meanwhile, coal and gas have got more expensive on the back of lower utilisation rates, and in Europe, higher carbon price assumptions following passage of the Market Stability Reserve reform."

The BNEF found that the global average levelised cost of electricity (LCOE) for onshore wind dropped slightly in the second half of 2015 - from $85 per Mwh to $83 per Mwh, while PV solar fell from $129 to $122.

In the same timeframe, the LCOE for coal and gas generation showed varied increases depending on location. In the Americas, it increased from $66 per Mwh to $75, from $68 to $73 in Asia-Pacific, and from $82 to $105 in Europe. The LCOE for combined-cycle gas turbine generation rose from $103 to $118 just $4MWh cheaper than PV solar, in Europe, Africa and the Middle East.

Levelised costs don’t just account for the cost of generating electricity but also the upfront capital and development expenses, as well the operating cost and maintenance fees. So the increased investment in renewables skews the trends slightly. 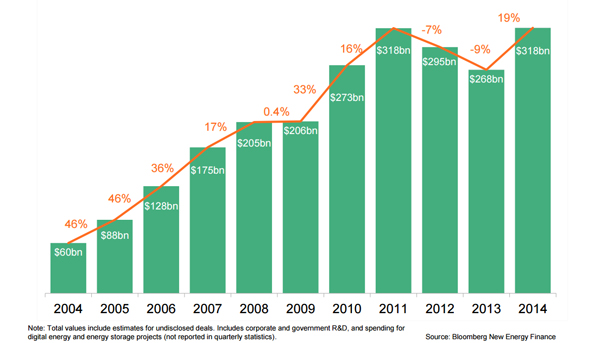 Among other low-carbon technologies, offshore wind reduced its global average LCOE from $176 per Mwh, to $174 - still more expensive than fossil fuels - while biomass costs remained stagnant at $134. Nuclear, like coal, varied depending on region with new costs ranging from $261 and $158 per Mwh.

Last of the canaries

The report chimes with another recent study carried out by the International Energy Agency (IEA), which found that the cost of generating electricity from renewable resources such as solar and wind has more than halved in the last five years as they closed in on competitive fuel prices.

The shifts in costs in the UK coincide with the Government’s decision to start wholesale decommissioning of various power plants. Earlier this year, Scottish Power announced that its coal-fired Longannet power station will be closing on 31 March 2016 after 46 years of service.

The release of the BNEF report comes on the same day that The Times is reporting that officials at the Department of Energy and Climate Change (DECC) have drawn up plans to shut down all of Britain’s coal-fired power stations by 2023. The plan could be announced before the climate talks in Paris in December.

Commenting on that potential plan, professor Hugh Montgomery, director of the Institute for Human Health and Performance at University College London, said: “As well as being the major fuel causing climate change, air pollution from coal-fired power stations causes nearly two thousand premature deaths in the UK each year, and its health impact in the developing world is even more significant. “

“So phasing out coal as soon as possible is obviously a good thing to do, and I would urge the government to stick to its guns in the face of the special pleading that is bound to materialise.”