A new report has revealed that renewable energy in the form of wind and solar photovoltaics reduced the wholesale annual cost of electricity by £1.55bn.

The UK has managed to increase its renewable capacity by threefold over the last five years to 28.4GW

The report, released today (19 October) by renewable energy company Good Energy, shows that the rise in renewable energy is currently lessening the impact that subsidies are having on bill payers. (Scroll down for full report).

Good Energy chief executive Juliet Davenport said: "What is not taken into account is the fact that renewable energy, such as wind and solar, has actually been bringing the cost of energy down for consumers. The bill payer money invested into supporting renewables yields significant benefits, let's be very clear about that."

The report found that the net cost for supporting the renewable sector last year was £1.1bn, 58% less than what was reflected in the Levy Control Framework.

The UK has managed to increase its renewable capacity by threefold over the last five years to 28.4GW. In the second quarter of 2015 just over 25% of electricity was generated from renewable sources.

Yet the Government has recently announced that it will cut subsidies for renewable sources in an attempt to keep bills as low as possible for families and businesses. 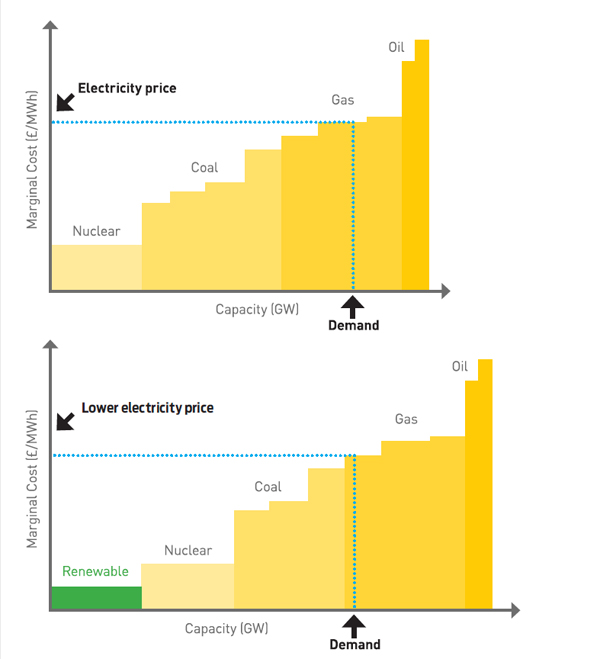 Commenting on the report, the Solar Trade Association's (STA) chief executive Paul Barwell said: "With the Government’s consultation on the Feed-in Tariff review closing this week [23 October], this report is very timely.

"This analysis shows that the net effect on bills of supporting new rooftop solar - under the STA's £1 plan - is zero. The £100m we need added to consumer bills over three years will be completely offset by the savings from solar lowering the wholesale price.  This is just the evidence that the Government needs."

The (STA) has put forward an emergency plan to support the solar industry in response to the government’s plan to cut subsidies for rooftop installations. The STA said the plan would add just £1 to consumer bills by 2019, on top of the £9 a year renewable subsidies already cost UK bill payers.

The report has been backed by experts at the University of Sheffield who are set to publish results from their own study into onshore and offshore wind costs.

Dr Lisa Clark, from the Department of Physics and Astronomy at the University of Sheffield, said: "At the moment the costs of renewable subsidy schemes such as Feed-in Tariff and Renewable Obligation have cast doubt over future of renewables. But there are very few reports of the actual financial savings from renewable generation like wind and existing savings to consumers."

"However, this report provides clear evidence that UK wind generation is typically saving UK consumers around £1.5n per year. This is more or less the same amount that the subsidies cost. At the University of Sheffield we have recently finished a similar study and we find very similar numbers.”

The reports were published in the wake of numerous blows to the renewable market. The government recently announced that the Feed-in-Tariff scheme could close a year early, with new applicants offered no support from 2016.