Renewables provided 25.3% of the UK's electricity in the second quarter, while coal accounted for 20.5%, according to Government figures released today (24 September).

RenewableUK’s chief executive Maria McCaffery said: “The new statistics show that Britain is relying increasingly on dependable renewable sources to keep the country powered up, with onshore and offshore wind playing the leading roles in our clean energy mix.” 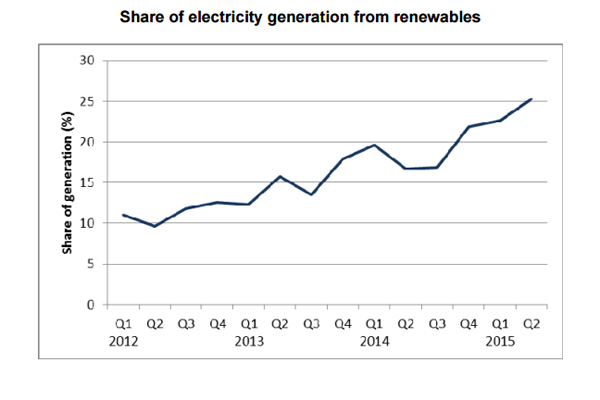 Wind power was the best-performing technology, providing more than 10% of the country’s electricity, and growing by 65% year-on-year.

The Department of Energy and Climate Change (DECC) said the growth was thanks to higher wind speeds and increased capacity from the continued expansion of several large scale offshore wind farms.

Solar PV generation also rose by a huge 115% due to increased capacity, while generation from bioenergy increased by 26% thanks to the conversion of a second unit of Drax coal power station to biomass.

In total, renewable electricity generation rose by more than 50% year-on-year, but the industry has warned that the gains were likely to be short-lived without continued government support.

McCaffery said: “As the transition to clean electricity continues apace, we’d welcome clearer signals from Government that it’s backing the installation of vital new projects. So far, we’ve had a series of disappointing announcements from Ministers since May which unfortunately betray a lack of positive ambition at the heart of Government.

“If Ministers want to see good statistics like we’ve had today continuing into the years ahead, they have to knuckle down, listen to the high level of public support we enjoy, and start making positive announcements on wind, wave and tidal energy."

A recent Greenpeace report claimed that the UK could feasibly generate 85% of its total energy from renewables by 2030 with an ambitious plan and significant investment.

Juliet Davenport, the chief executive of renewable energy generator Good Energy, added: "A future powered solely by renewables is possible but only if practical and pragmatic, evidence based policy for renewable energy is in place.

In related renewables news today, final planning permission has been granted for what will be England’s largest windfarm. Rochdale Council gave permission for two turbines to be built within their borough border, meaning that 16 turbines in total will be added to Scout Moor windfarm, creating a 39-turbine, 101MW project.