The climate pledges made by rich countries are less than their 'fair share', according to new report released today (19 October).

Japan, the US and the EU are contributing as little as a fifth of their estimated fair share reduction targets

It states that the climate change pledges from 146 countries for December’s climate conference in Paris are ‘putting us on course for irreversible and more devastating climate change’.

The report attempts to define the fair share that each country should take on in order to combat climate change, based on countries' historical accountability and economic capacity to tackle the issues.

The report states: “To date governments have escaped meaningful scrutiny and rejected notions of ‘fair shares’, asserting the uniqueness of their particular ‘national circumstances’ and their ‘right’ to determine their own level of climate ambition. This is not fair and the pledges do not add up to what climate scientists say is needed.”

In the context of fair shares, the report argues that the richer countries (which have historically contributed more damage to climate change) have the capacity to reduce emissions by over 24 gigatonnes creating an ‘ambition gap’ of over 15 gigatonnes of Co2e left unaccounted for. 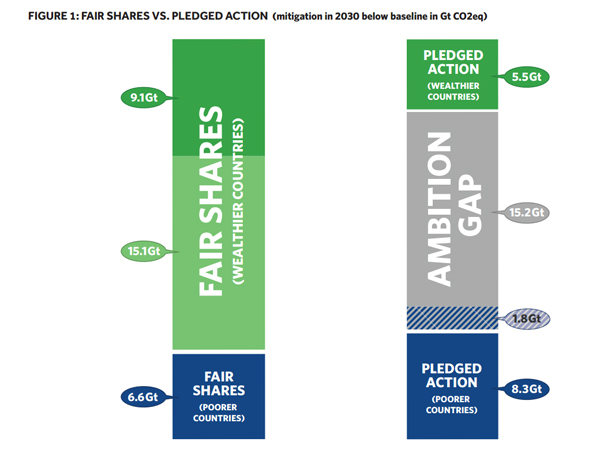 The Civil Society suggests that the Paris Agreement should provide government frameworks where targets are set in line with fair shares. They also state that to avoid a 3 degree world, emissions must be reduced in 2025, 2030 and 2040 with a view of near-zero emissions by 2050.

The Paris talks should also include a step-change in international climate finance by creating a clear and fair plan to address the emissions gap by holding developed countries responsible.

Friends of the Earth International echoed the suggestions from the report as governments from around the world start a week-long gathering at the UN climate talks in Bonn, to draw up the draft text of a new global climate treaty.

Susann Scherbarth, climate justice and energy campaigner at Friends of the Earth Europe said: “Emission cut pledges made by rich countries so far are less than half of what we need to avoid runaway climate change. The draft Paris agreement on the negotiating table this week shows that many seem ready to accept irreversible and devastating consequences for people and the planet.”

Dipti Bhatnagar, Friends of the Earth International's climate justice coordinator said: “Politicians are on track to fail us at their summit in Paris. Many politicians, under pressure from transnational corporate polluters profiting from fossil fuels and dirty energy, are promoting coal, fracking and nuclear at the UN and nationally. Instead, they should commit to drastic emission cuts and a transformation of our energy system.”

edie recently published an article explaining everything you need to know about the COP21 talks in Paris, which can be read here.