Last month's unseasonably warm weather proved a boon for clean energy output in Scotland, with enough sunshine to provide more than 70% of the electricity and hot water needs of homes fitted with solar panels.

Moreover, stronger winds throughout the month led to an 80% leap in wind energy output across the country – enough power to supply the average electrical needs of 64% of Scottish households.

“We recently learned that, during 2014, Scotland’s renewable energy sector helped us to avoid a record amount of carbon emissions,” said WWF Scotland’s director Lang Banks. “Given the big jump in renewables output during September, it’s very likely we’ll be breaking even more records this year.

Wind generated enough power to supply 100% or more of Scottish homes on five out of the 30 days of September. For the month as a whole, wind energy generated the equivalent of 28% of Scotland’s entire electricity needs.

Solar power generated an estimated 70% or more of the electricity needs of an average household in Dundee, Stirling, Perth, Edinburgh, and Glasgow, and 65% or more in Inverness and Aberdeen.

Latest figures from the Department for Energy and Climate Change (DECC) for renewable energy generation in 2014 revealed that 49.6% of gross electricity consumption came from renewable sources in Scotland last year - an increase from 44.4% in 2013 – which means Scotland hit its 50% renewable electricity target a year ahead of schedule. 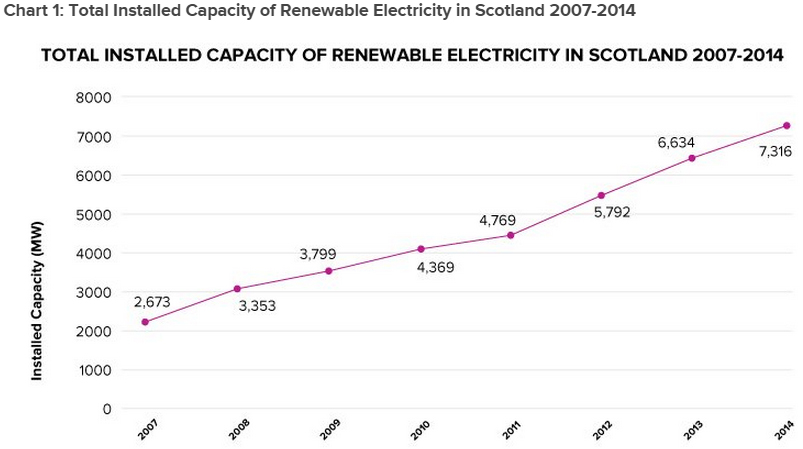 But while Scotland remains far ahead of the rest of the UK in terms of renewable electricity generation, Banks believes there is still much more to be done in the area of renewable heat.

The Scottish Government has set a target for 11% of non-electrical heat demand to come from renewable sources by 2020 – currently, just 3% of heating demand comes from renewables.

“We hope, ahead of the Holyrood elections, that all parties commit to introducing a Warm Homes Act that helps bring clean and affordable warmth to thousands of households in Scotland, by supporting the growth of district heating and renewable heat,” Banks said. 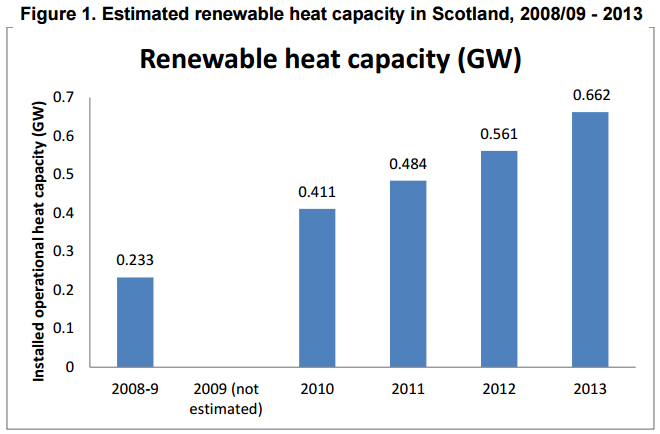 Scotland’s renewable energy figures come in the same week that a new report from RenewableUK underlined the multiple benefits of wind energy across the UK. The wind energy industry drove £1.25bn of investment into Britain's economy last year, employing 30,500 people, according to the report.

Another report released this week, from Bloomberg New Energy Finance, concluded that new onshore windfarms are now the cheapest way for a power company to produce electricity in Britain, with costs dropping to around £55 per MWh compared with the current costs of about $115 for constructing coal or gas-fired plants.