Heineken has taken its sustainability strategy to the next level by becoming the first major brewer in the UK to implement a large-scale solar panel installation on the roof of one of its flagship production sites in North Yorkshire.

The 4,000 solar panels will generate approximately 876 MWh each year - enough to power 185 homes

John Smith's Brewery in Tadcaster is set to power up over 4,000 solar panels that cover its huge corrugated iron roof; generating more than 876MWh of electricity each year which will be used to power the brewery's bottling and canning departments.

"When laid out side by side, the panels would cover an area equivalent to five Olympic-sized swimming pools," said Tadcaster's Brewery Manager Martin Kochl. "We are really proud that Tadcaster is now home to the biggest solar panel installation at any brewery in the UK.

"Sourcing the power we need to make our beers and cider from renewable energy sources like solar energy help us to reduce the environmental impact of our business and forms a key part of our sustainability programme - Brewing a Better Future."

The solar project is owned and operated by SolarAccess Energy, which will sell the renewable energy back to Heineken at a reduced price. The 876MWh generated is the equivalent of around 5% of the brewery's total electricity consumption, with an additional 10% coming from an on-site biogas plant.

It follows a similar initiative adopted by Heineken in the Netherlands last year, which saw 3632 solar panels installed on the roof of the Wieckse brewery in 's-Hertogenbosch.

Speaking of this added focus on renewable electricity generation, Heineken's head of public affairs and corporate responsibility David Paterson told edie: "Investments such as this demonstrate to our customers that this is something we are really committed to, rather than just paying lip service to sustainability.

"We've set ourselves the ambitious target of reducing our emission in production by 40% worldwide by 2020 and by 20% in distribution in Europe & the Americas by 2020. This includes looking at how we invest in renewable energy sources like solar power. We already get 25% of our UK electricity from wind power.

"It's also important to focus on how we manage our day to day brewery operations - our system of Total Productivity Management (TPM) which is in place at all of our production sites in the UK puts a major focus on how we reduce energy use." 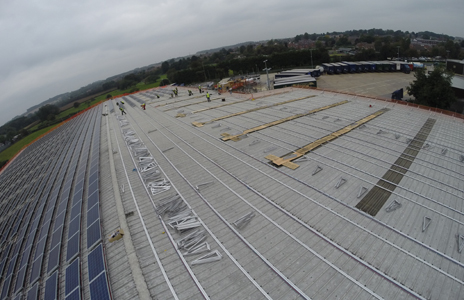 This is Heineken's sixth solar project in Western Europe and Paterson confirmed that the group is always looking at options for more renewable energy initiatives throughout the continent.

Last month, Heineken took part in a live Twitter Q&A to update stakeholders on its ongoing sustainability strategy and discuss what 'local sourcing' means for an international brewer. In its latest sustainability report, Heineken revealed that it had beaten its water reduction target but fell short of its energy consumption target due to the acquisition of new businesses.

The solar panels at John Smith's Brewery are set to be switched on and fully operational within the next few weeks.