Demand for renewable energy is predicted to increase by 13% in 2015 as 'dirty coal goes out of fashion' and global governments impose tighter environmental rules.

Renewables growth will outpace that of oil, coal and gas in 2015

That's according to a report from the Economist Intelligence Unit, Industries in 2015, which suggests that the growth in renewables will outpace that of petroleum and coal, and energy companies will feel the impact of low oil, gas and coal prices in 2015.

By December, a global climate change treaty, replacing the Kyoto Protocol, is likely to be signed at the 2015 United Nations Climate Change Conference in Paris. But, ahead of the talks, the report argues that non-fossil fuels still lack the overarching policy support they need to make faster progress globally.

"In 2009, the world tried and failed to hammer out a replacement for the Kyoto Protocol," the report reads. "Some form of new pact is indeed likely to be signed, perhaps incorporating voluntary, scalable targets for individual countries. Whether it will be equal to the task of keeping global warming within safe bounds is far more doubtful."

China currently consumes almost half of all the coal burnt every year. However, following a deal in November last year to cap emissions for the first time, the country is redoubling its clean-up efforts and consumption of fossil fuels will expand only slightly this year.

"The oil glut will grow as shale drilling keeps expanding in the US, albeit more slowly. Low oil prices will force Western majors to slash spending further, after years of bloat," said Martin Adams, energy editor of The Economist Intelligence Unit.

"At the other end of the spectrum, clean-tech companies will look for a boost from a new agreement on global warming. But the new treaty is set to be weak and non-binding." 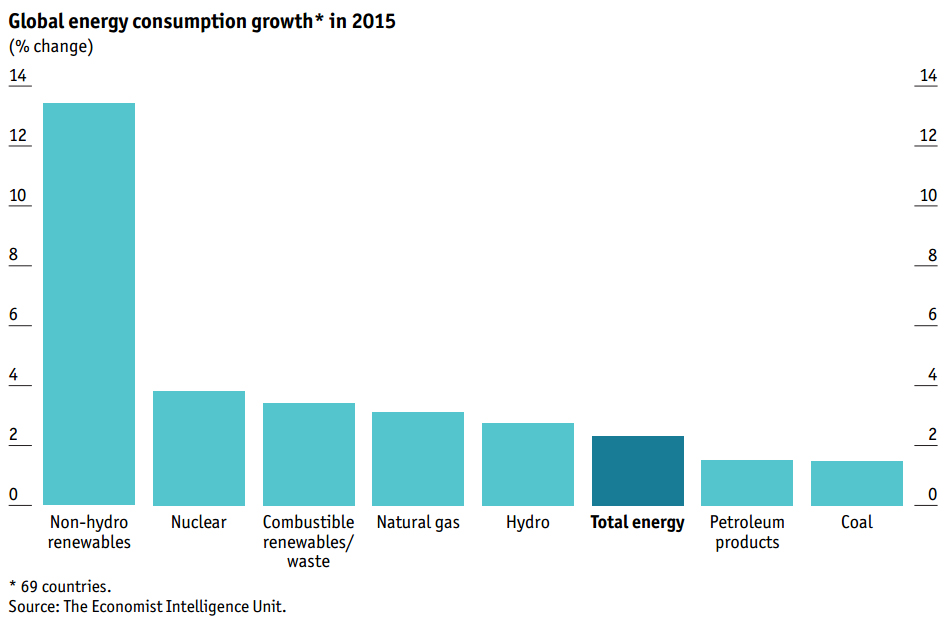 Earlier this month, edie reported on how the oil price crash might affect the renewables market. While leading commentators suggest clean energy will be damaged as suppliers abandon renewables in favour of cheap oil, industry analysts have responded that oil price fluctuations, at worst, will have a minimal effect on renewables and, at best, could benefit the industry.

Stay in the loop. Register free for the edie newsletter here.