UK solar will be cheaper than gas by 2018, says STA

Generating electricity from solar PV could be cheaper than burning gas as early as 2018, as long as the Government provides stable policy support.

That's according to a new report from the Solar Trade Association (STA) - Cost reduction potential of large-scale solar PV - which suggests that solar will be cheaper than the wholesale price of electricity sometime between 2025 and 2028, while the cost of generating electricity from gas will increase. 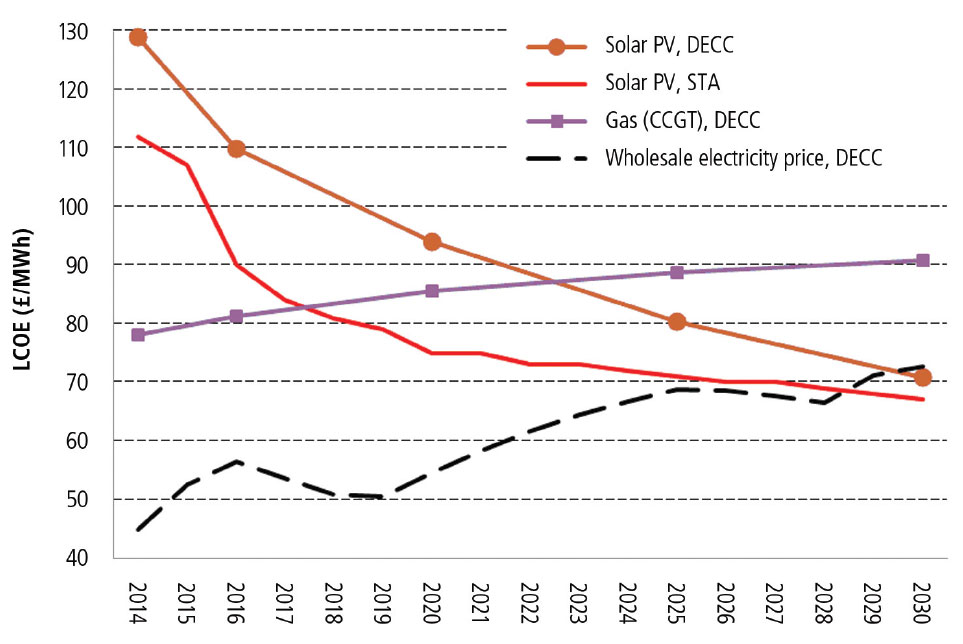 STA chief executive Paul Barwell said: "A lot of people still don't realise just how close solar is to being competitive with gas-fired power generation. UK solar is on its way to becoming subsidy-free, but it is critical we maintain stable Government policy that supports grid connected utility-scale solar as opposed to fossil fuel power stations."

The study also reveals that the cost of generating electricity from a typical 10MW solar farm in the UK could drop faster than thought over the next 15 years and, thanks to a growing solar supply chain in the UK, the cost cost of building large-scale solar farms will go down faster than currently estimated by the Government.

Despite overwhelming evidence that solar has the potential to transform our energy supply, the Government recently announced the closure of the current Renewables Obligation subsidy scheme for solar farms over 5 MW, which could slow the falling cost of generating solar electricity on a large scale.

Barwell said: "It is clear that it makes political and economic sense for the Government to back large-scale solar, with the sector's track record in creating jobs, and producing ever cheaper zero carbon power."

"This report makes that case even more strongly - our updated costs forecast shows that solar is even cheaper than thought. We just need one final push from Government to get solar to being subsidy-free. A home grown solution to Britain's energy crisis.

"It is in the interests of both energy bill payers and the planet to maintain stable support for good quality large-scale solar farms. If we invest now - and make sure the new Contracts for Difference support scheme works for solar - this technology could in ten years' time be bringing down energy bills."