Electricity generated from renewable energy increased to 41.1TWh in 2012 in the UK, up 20% from 2011, according to Government figures.

The latest figures published today by the Department of Energy and Climate Change (DECC), offshore wind recorded the largest absolute increase in generation, rising from 5.1TWh in 2011 to 7.5TWh in 2012, a 46% increase. This was largely due to increased capacity.

Onshore wind generation increased by 15%, from 10.4TWh to 11.9TWh, with the impact of increased capacity out-weighing "slightly lower wind speeds". 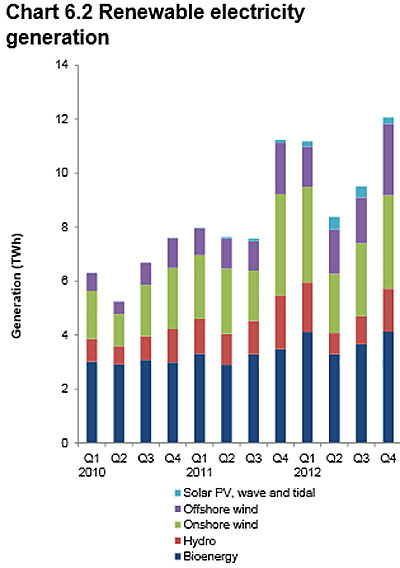 However, the figures show that hydro generation fell by 8.1% on a year earlier, from 5.7TWh to 5.2TWh. This was because levels of rainfall in 2012 were 24% lower than those of 2011, which were the highest in at least the last decade.

Figures also showed that electricity generation from bioenergy increased by 17%, from 13.0TWh in 2011 to a record 15.2TWh in 2012. According to DECC, generation from plant biomass more than doubled, from 1.7TWh to 4.2TWh, which was due to the opening of Tilbury power station at the end of 2011.

However, generation from co-firing fell by 39%, despite increased generation, coal power stations burned a smaller proportion of biomass with coal.

In 2012, 37% of renewables generation was from bioenergy, 29% from onshore wind, 18% from offshore wind, and 13% from hydro. Despite a large increase in capacity, just 3.2% was generated from solar PV.