In its annual Sustainability Report released yesterday (July 30), the firm reported that it has met its 2016 goal of reducing air and ground carbon intensity by 10% three years early.

UPS achieved a reduction in CO2 emissions intensity of 13.4%, representing an absolute reduction in greenhouse gas emissions of 1.5% compared with 2012. This was despite the company's total global package operational capacity increasing 3.9% in the same period.

The introduction of more efficient fuel systems in its fleet, including liquefied natural gas and hybrid vehicles, meant UPS achieved more than 350 million miles driven by its fleet on alternative fuels.

Implementation of its new ORION (on-road integrated optimisation and navigation) system, adopted during 2013, will help plan more efficient deliveries and is expected to save UPS an estimated 1.5 million gallons of fuel, avoiding 14,000 tonnes of CO2 emissions in 2014. There is a clear business incentive too, with UPS stating that if every delivery saves one mile per journey, the company will see savings of up to $50m per year.

In his executive statement, UPS chief executive and chairman Scott Davis said: "We are on track or ahead of schedule to achieve most of our goals. In many cases this progress is the result to strategic initiatives that we implemented years ago, and that are enabling us to set new, more ambitious goals for the future."

UPS measured its emissions intensity in its US packaging business, its global airlines and freight transportations. As well as the overall reduction compared to the 2007 baseline, it achieved a 10% CO2e reduction in its airline fleet with measures such as modified aerodynamic 'winglets' on its Boeing 767 aircraft saving 2.5m gallons of jet fuel in 2013. 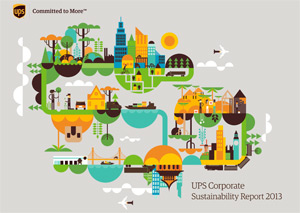 UPS realised a total global water consumption reduction of 4% in 2012-13. It also now recycles almost 60% of total US packaging and supply chain waste.

Further environmental initiatives include cutting nitrogen dioxide emissions by 60% by 2020, with the company achieving a 16% reduction since 2012. UPS has also planted more than 1.3 million trees worldwide in 2012-13 and has plans to plant another million trees this year.

UPS chief sustainability officer Rhonda Clark wrote: "If we reach a particular goal much sooner than we expected, we don't wait for years to raise the bar.

"Our current environmental goals say that UPS, even with one of the most efficient logistics networks on earth, can still do more for customers while limiting adverse impacts."

This year, UPS achieved a ranking of 28th on Interbrand's top 50 sustainable brands.