US solar capacity to double in next two years

American solar capacity could double by the end of 2016 according to a new report from the oil-and-gas association American Petroleum Institute (API).

Currently the US has an estimated 20.2GW of installed solar capacity, enough to power nearly 4 million US homes, with another 20GW in the pipeline for 2015-16.

From an environmental perspective, solar helped offset an estimated 20 million tonnes of harmful CO2 emissions in 2014, equivalent to taking 4 million cars off U.S. roads or saving 2.1 billion gallons of petrol.

President of the Solar Energy Industries Association Rhone Resch said: "It took the US solar industry 40 years to install the first 20GW of solar. Now, we're going to install the next 20GW in the next two years.

"In fact, during every single week of 2015, we're going to install more capacity than what we did during the entire year in 2006. Any way you look at it, solar energy is paying huge dividends for the economy, our environment and America's future."

Indeed this is the first time that solar has been included in the API's annual energy report, highlighting the growing influence of renewable energy.

Nowhere is this growth better exemplified than the state of California, where re-elected Governor Jerry Brown targeted 50% of electricity from renewables in his inaugural address this week.

In 2013, the state accounted for more than half of all solar capacity installed in the US, and the state's sunny climate means that solar systems are extremely efficient.

A recent study found that energy from utility scale solar in California costs between 7.2 cents and 8.6 cents per kWh, or about half of what Californians pay for electricity on a commercial scale. 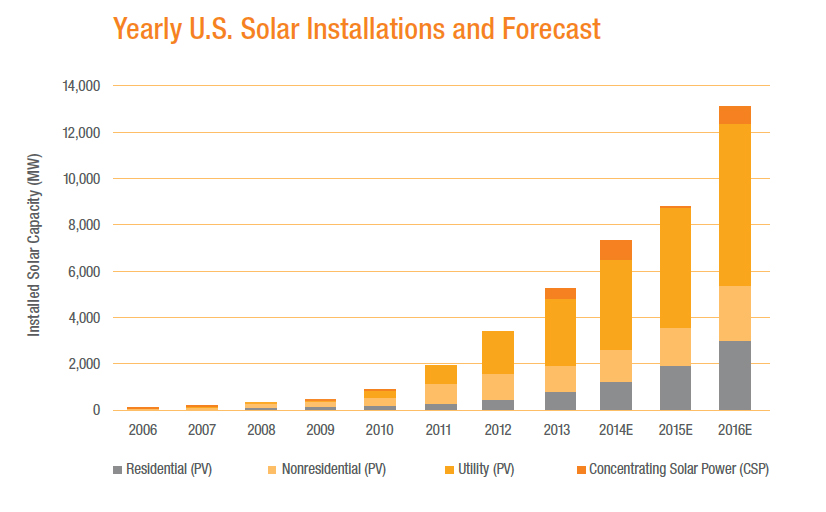