Universities lagging behind on emission targets

Universities and colleges in England will miss their collective 2020 carbon emissions reduction target by half based on current trajectories, according to new research out today (15 April).

The Higher Education Funding Council for England (HEFCE) set a target of a 43% reduction in carbon emissions over a 15-year period from a 2005 baseline. But publically available data from the Higher Education Statistics Agency (HESA) and HEFCE has revealed that a reduction of just 8.5% had been achieved by 2013.

The research, produced by sustainability consultancy Brite Green, predicts the sector will eventually achieve just 51% of the 2020 target, posing important questions about the effectiveness of existing policy mechanisms to achieve legally-binding emissions reduction targets set for the whole of the UK under the Climate Change Act.

Darren Chadwick, managing partner at Brite Green, said: “This year marks the half-way point for HEIs in England to meet their 2020 emissions reduction targets they set out in their carbon management plans. Our findings show that whilst some universities and college have delivered excellent reductions, many are well behind their targets.

“Now is a good time for universities and colleges to update their carbon management plans and for policy makers to re-examine the pathway to make sure we’re on track to meet our long term carbon reduction commitments.” 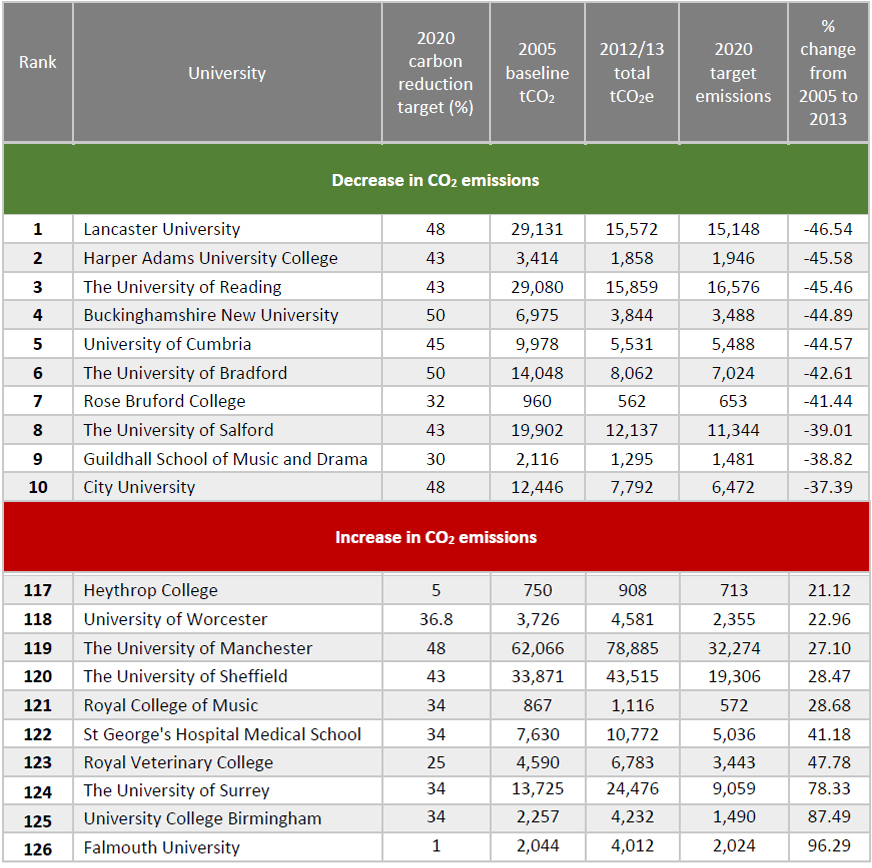 Of the 126 universities analysed, only 44 are on track to meet or exceed their 2020 carbon reduction targets and 82 are projected to miss them.

The findings come at a time when universities across the country are embroiled in campaigns to divest from fossil fuel holdings. The University of Edinburgh today announced plans to divest from companies involved in coal and tar sands extraction, but campaigners said the action did not go far enough.

Since October 2013, students in the People & Planet network have launched over 60 Fossil Free campaigns across the UK, engaging over 25,000 students. But just two universities in the UK – Bedfordshire and Glasgow – have actually divested so far.

Fossil fuel divestment is seen as crucial to achieve a renewables revolution. In the UK, the Climate Change Act was introduced in 2008 to ensure the UK slashes carbon emissions by at least 26% by 2020 and 80% by 2050, from 1990 levels. Last year, emissions dropped by 8.4% - the biggest annual fall since 1990 – but green groups have warned that more action will be needed to reach the set targets.