With the world on track for 3.2C of warming by the end of the decade, by UN estimates, Aviva Investors' chief responsible investment officer Steve Waygood is urging professionals in his line of work to go beyond their four walls and influence international climate plans.

Waygood has been with Aviva Investors for 14 years, founding its Centre for Sustainable Fiance Excellence

Waygood took to the virtual stage this morning (14 July) to give the opening keynote speech for Day Two of edie’s Sustainable Investment Conference. Sponsored by ICF and EY, the two-day event convened dozens of experts from across the global sustainable finance sphere for frank discussions around shared priorities, roadblocks and innovation trends.

Waygood spoke about why, despite an increase in net-zero commitments from financial firms, compounded by an increased interest in the conversation from actors including finance ministers, national banks and NGOs, markets are continuing to reward the high-carbon activities putting the world on course to breach the Paris Agreement.

“The Paris Agreement – a great treaty though it is – remains a work of fiction when it comes to the capital markets. Things are changing but not quickly enough,” he said, accusing national governments including Australia, Saudi Arabia, Russia and Brazil of “putting the brakes on the G20’s ambitions”.

Waygood continued: “This might be in their short-term interests but it is absolutely not in their own long-term economic interests. Money is a medium exchange that could no longer work if we see these Armageddon scenarios play out.

“It is myopic short-termism and the tragedy of the horizon, as Mark Carney put it, writ large.

“It is dangerously close to being unmanageable, uncontrollable, runaway climate change, but not quite yet. We have 5 to ten more years so we need to be on a campaign footing, taking this very seriously.”

For Waygood, there are three moves that governments can take to help align global markets with the Paris Agreement. These are mandating strong climate reporting; putting a robust price on carbon and implementing the “polluter pays” principle and changing international financial infrastructure.

On the former, he called the recommendations of the Taskforce on Climate-Related Financial Disclosures (TCFD) “a reporting agenda that makes sense, with the G7 enforcing it as a mandatory trajectory”. This mandate should help to close data gaps, so often cited as a barrier to delivering an appropriate response to the climate crisis, as well as informing investors with comparable reports.

But Waygood added that longer-term scenarios are needed if any actor – be that a private investor or national bank – is to properly assess climate risks. Coming back to the idea of the tragedy of the horizon, he said: “The extreme physical risks of climate change only really manifest north of 2070. If we only forecast out 30 years, we may end up concluding that the risks are not that profound.”

On carbon pricing, Waygood continued: “Too great a focus on simply reporting is inappropriate. We must also make sure that the information that is reported is then included in the analyst’s discount cash flow valuation model, so that carbon is priced and emissions are rewarded with a lower cost of capital.”

With this in mind, he called the recent G7 communique “underwhelming”. Event chair Richard Howitt, senior associate at Frank Bold LLP and former chief executive of the International Integrated Reporting Council (IIRC), agreed. Also floated was the idea of coupling overall carbon pricing with mandates for high emitters to finance the cost of dealing with their Scope 3 (indirect) emissions, perhaps using carbon capture.

Coming on to international financial infrastructure, Waygood argued that most professionals in this sphere could do more to understand its workings. Below is a diagram used during the speech to summarise, roughly, its structure. 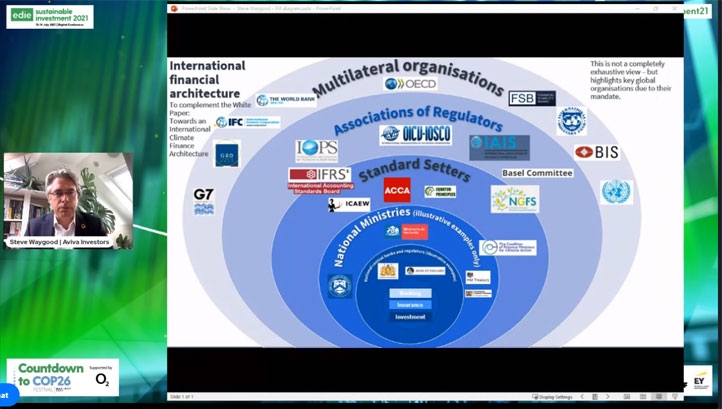 Waygood also argued that the infrastructure, set up post-WW2, is clearly not fit-for-purpose and called climate change “the greatest market failure”. As there is no one architect of the system, he explained, multi-lateral agreements such as a G20 communique could assist in bringing about reviews and changes.

While these calls to action all focussed on actions to be taken by nations and in international agreements, Waygood was asked by Howitt what individual professionals – especially those leading on ESG at corporates or large finance firms – could do.

He replied: “Most ESG analysts would recognise that their job is to exploit market inefficiencies, improve long-term risk-adjusted returns. Their job is also to engage with the companies they own to ensure that they, in turn, are doing everything they can to be sustainable.

“Many of my peers, at the point they find a market failure, will shrug their shoulders and give up, saying it is unfortunate that the current incentives in the system do not reward the right behaviour…. I think that’s where the financial services industry is failing. It is clearly influential; we need to use that influence for macro-stewardship, not just micro-stewardship with individual companies.”

This idea of macro-stewardship ties in with the concept of ‘Scope X’ – the impact that any business does have, or could potentially have, on society beyond its own value chain. The term was coined by Futerra’s chief solutionist and co-founder Solitaire Townsend last year; she argued that any organisation wishing to credibly dub itself a climate leader should be leveraging all parts of its Scope X influence to deliver positive benefits for people and the environment.