Every month, numerous eye-catching and potentially transformational innovations are being developed to help businesses and nations turn their green ambitions into actions. Here, we round up six of the best from April 2021.

These innovations could help make sectors including shipping and energy more sustainable, and improve water access for those in need

As March comes to a close, we wave farewell to a month that saw the edie team covering Earth Day 2021 and the Biden Administration's first high-level international climate event, which saw new goals being set by nations including Japan, Canada and the UK.

While mainstream news headlines have, understandably, focused on the international rollout of vaccines, the Covid-19 crisis in India and the death of Prince Philip, it has been an exceptionally busy month in the sustainability space.

Aside from the new government commitments, there has also been growing scrutiny of the UK Government's net-zero plans, including its approach to taxes and its funding for R&D. Forget Boris Johnson's flat refurbishment - these are the issues edie readers are keeping an eye on.

In this round-up, edie outlines six of the most promising green innovation stories from April 2021.

Across the whole value chain, the built environment sector contributes to some 40% of annual global emissions. Building materials are often carbon-intensive and represent a significant proportion of this impact.

In a bid to address this issue, while also addressing the mounting plastic pollution crisis, UK-based Sphera has developed a process that transforms waste plastic into aggregate for concrete and other construction materials. Plastic used is classed as hard-to-recycle in existing mechanical infrastructure and would otherwise likely end up burned or landfilled. At the same time, the carbon emissions associated with the processes are lower than traditional methods, as it is more energy-efficient due to a reliance on compression.

Sphera founder Natasha Bounding has applied for a patent for the technology, which has already secured Innovate UK Funding and received a Shell LiveWIRE award as well as an Innovate UK Women In Innovation awards. Her hope is to bring the technology to commercial scale and work with partners in the construction industry to deliver carbon-negative concrete – i.e. the carbon sequestered in the product and saved from re-circulating materials is higher than its life-cycle impacts. 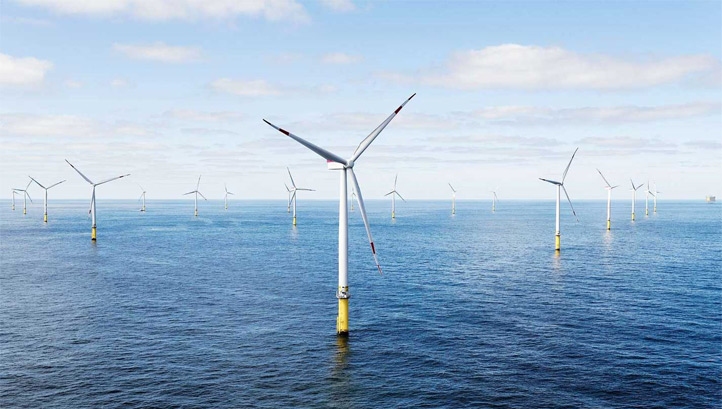 Our second project this month comes from another Innovate UK Women In Innovation award winner, Cedeco founder Jacqueline Morrison. Morrison has developed a mechanical alternative to grout for use in the offshore wind sector, designed to help developers minimise the embodied carbon of projects.

Cedeco’s founding comes as the UK works to meet its pledge to scale up offshore wind capacity to 40GW by 2030. Morrison claims that the technology could help lower project costs as well as associated carbon, because it requires less steel, less space, less transportation and, of course, no grout. The systems can also be removed and recycled at decommissioning.

Morrison is working with the DNV on certification, and collaborating with the National Composite Centre to develop a scaled prototype. ScottishPower has already expressed an interest in the technology. 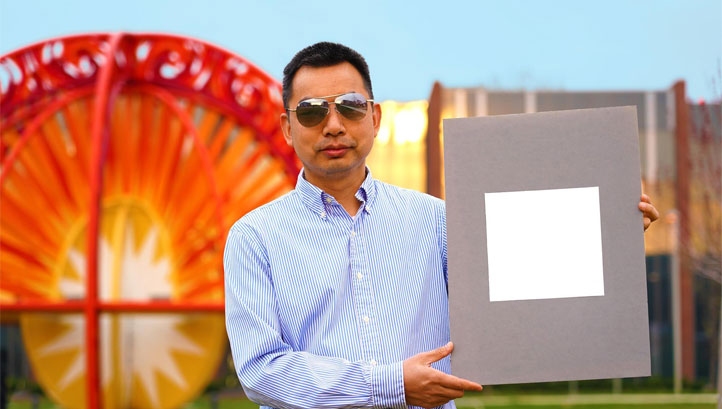 As global temperatures increase, many cities are feeling the effects more acutely due to the phenomenon of ‘urban heating’ – buildings, roads and other infrastructure absorbing and retaining heat.

Of course, city planners and other actors across the built environment are being encouraged to install more nature-based solutions, ensure that buildings are net-zero and to reform planning systems. But smaller innovations also have a role to play and, this month, tabloids were keen to highlight a Purdue University project that has created the world’s whitest paint. The paint can reflect up to 98.1% of sunlight, whereas existing paints can reflect 90% as a maximum.

The researchers behind the paint claim that, in some applications, the cooling effect would be more effective than air conditioners – which, of course, consume energy in operation. The paint is so white because ingredients including barium sulfate feature in the formula. 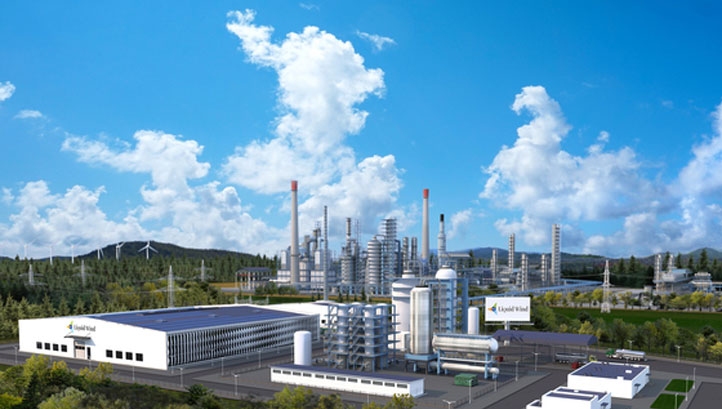 Shipping is currently responsible for around 3% of global CO2e emissions, but researchers for the European Parliament believe this proportion could rise to 17.5% by mid-century without a step-change in approach.  To meet, or go beyond, the IMO’s climate targets, many firms are exploring alternative fuels including hydrogen.

The latest news in this space comes from UK-based carbon capture specialist Carbon Clean, which has partnered with Swedish fuel start-up Liquid Wind to convert carbon captured from heavy industry into e-methanol. The partnership is aiming to produce 50,000 tonnes of e-methanol every year on the east coast of Sweden, comprising 70,000 tonnes of captured CO2, once production is scaled up in 2024.

Liquid Wind is aiming to build 500 e-methanol production facilities in the next 30 years, starting in Sweden. Carbon Clean, meanwhile, has captured more than 935,000 tonnes of CO2 since 2009, through projects such as its CCS array at a chemical and fertiliser plant in India. 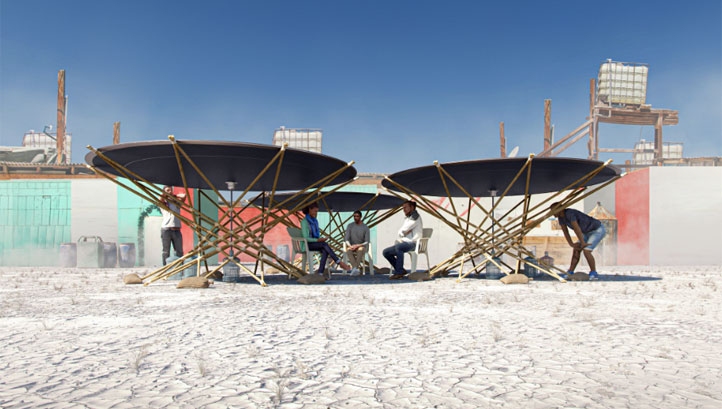 Two billion people globally lack access to clean water, and that the UN is warning of widespread water scarcity by mid-century. Moreover, access to water and sanitation a key human rights issue – particularly in the context of Covid-19, and with less than a decade left to achieve the Sustainable Development Goals (SDGs).

With this in mind, New Zealand-based innovator Henry Glogau has developed a water purification concept that uses portable solar arrays to produce clean drinking water from saltwater and from polluted freshwater. Heat from the sun is used to catalyse the cleaning process. While processes are ongoing, users can also use the array for shade.

Glogau has also developed a solar desalination ‘skylight’, which cleans saltwater during the day and then uses the remaining salt brine powers batteries at night. However, it was the larger distiller that won him the Lexus Design Award 2021 this month. 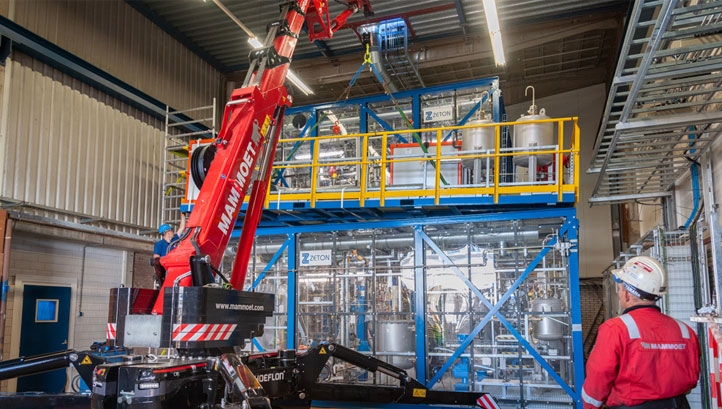 According to the Changing Markets Foundation, the production of fossil-based synthetic textiles has doubled globally within 20 years, The organisation claims that this process is now generating 700 million tonnes of CO2e every year. However, natural fabrics like cotton bear their own climate impact, due to the sheer amount of water taken to grow them.

As material innovation continues across the fashion sector, Avantium has successfully produced polymers using 100% plant-based materials at its demonstration plant in Delfzijl, The Netherlands. The plant converts sugars from organic materials and wastes to glycols, allowing them to be made into polymers comparable with fossil-based materials.

Aside from making textiles that bear a lower climate footprint and are potentially easier to recycle, Avantium intends to use the plant to make bio-alternatives to plastic packaging that can still be recycled mechanically. The polymers may also have applications in replacing fossil-based de-icers.

Do you have news or information about an innovation you’d like to see featured in this series? Email sarahgeorge@fav-house.com