'Moving the trillions': 6 things you need to know from Finance Day at COP26

With the World Leaders Summit wrapped up, the COP26 presidency programme now consists of themed days for non-state actors, as negotiations continue. Wednesday (3 November) was finance day - one of the most highly anticipated. Here, edie rounds up six key headlines from the day.

Tuesday (2 November) marked the second and final day of the World Leaders Summit here in Glasgow, with major global commitments made on key topics including methane, forests and clean technologies. The headlines continued to come in thick and fast on Wednesday, with multi-billion and trillion-dollar announcements on the environment from bodies representing virtually all parts of the financial system.

At the same time, protests continued and green groups in the Green Zone continued to question the small print behind the top-level announcements. Here, edie rounds up six of the day’s major talking points, with finance hoping to prove it is ready to turn talk into action.

This morning, former Bank of England Governor Mark Carney and Chancellor Rishi Sunak confirmed that the Glasgow Financial Alliance for Net-Zero (GFANZ), which launched in April in a drive to unite the global financial sector in transitioning to net-zero portfolios by 2050, now represents more than $130trn in assets under management. 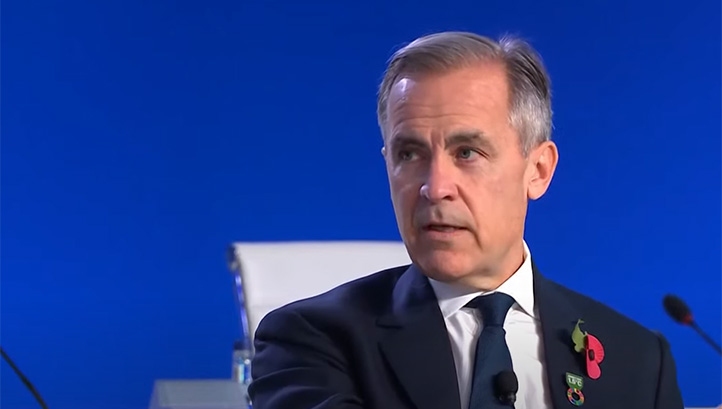 2) Green groups question whether GFANZ announcement is all it seems

Groups including Reclaim Finance are here to ask questions about the top-line commitments coming from the Blue Zone today. A shared criticism is that only a fraction of GFANZ’s collective assets are being aligned with a net-zero by 2050 roadmap, and that this roadmap came from the Alliance itself. In short, there is a risk that they are marking their own homework.

The UN has promised to establish a group of experts analysing the credibility of net-zero commitments from non-state actors but it is not operating yet.

ShareAction’s senior manager Jeanne Martin said: “It’s true that these financial institutions have all committed to reaching net-zero, but dig into the numbers and you see that they are not making this commitment for all of their assets.

Last month, HM Treasury confirmed that large firms in high-emitting sectors will be required to publish net-zero transition plans by 2023. Such plans should outline how their changes in business model will affect their skills base and financial expectations, and how they intend to support workers and related communities in the coming decades.

Today, it was announced that the Government is developing a science-based ‘gold-standard' verification scheme for the plans, to safeguard against greenwashing. This scheme has been drawn up in collaboration with industry representatives, academics, regulators and civil society groups.

The World Business Council for Sustainable Development (WBCSD), which represents 200 corporates, has stated that the UK should mandate net-zero transition plans for all large businesses by 2025, so we may well see information on how the Treasury plans to extend the mandate.

The UK issued its first green gilts this year – two packages of £10bn and £6bn respectively. The bonds form part of the national Covid-19 recovery plan and many have pointed out that the nation has been slow to start its work in this space.  France, according to the Climate Bonds Initiative, raised more than £9.4bn through issuance in the first half of 2021, and issued its first package back in 2017.

Sunak today ledged that all returns from the UK’s contributions to Climate Investment Funds (CIFs) will be used for the issuance of further green bonds. The potential for further issuance, solely from returns from the CIFs, will be £22-51bn.

Our @dropthedebt Loch Ness debt monster is being impounded by the police at #cop26 We wanted to show that the global South debt crisis cannot be ignored if we are to achieve climate justice. pic.twitter.com/h0y49UpYdj

In a story that has gone viral on social media, a giant inflatable Loch Ness Monster, intended to represent the “monster-osity of climate debt burden”, was seized by police this morning.

The Nessie replica was organised by the Jubilee Debt Campaign, which campaigns for more action to alleviate poverty globally. Their specific ask for today’s demonstration was for wealthy nations to stop providing international climate finance in the form of loans, thus putting developing nations in new debt. Grants should be used instead, the group is arguing. The campaign also wants existing debt to be cancelled.

“Lower-income countries’ unsustainable debt is preventing them from fighting the climate crisis - and when climate disasters hit, countries are pushed into further debt to pay for reconstruction,” said head of campaigns for the organization, Eva Watkinson. “Rich polluting countries created the climate crisis and should take responsibility by cancelling the debts of countries that need it and ensuring climate finance is given in grants, not more loans.”

The IFRS Foundation Trustees, following years of work on its development, have launched an International Sustainability Standards Board (ISSB) to create a global baseline for corporate sustainability disclosures that meet investor demands.