America's Pledge and Europe's Green Deal: What happened on days 8 & 9 of COP25?

COP25 - the UN's annual two-week-long climate summit - has entered its second week in Madrid. Here, edie rounds up all the key news and views from the last few days of the event.

While UK Prime Minister Boris Johnson was posing for photos with fish and nicking phones from journalists, other world leaders were still articulating the urgency and need to respond to climate crisis at the COP25 summit in Madrid.

Despite climate debates and voter concerns, climate change has taken a backseat to Brexit and the NHS in this week’s General Election, but in Madrid, it is centre stage.

COP 25 is well into its second week, and has already captured global media attention following the arrival of teenage activist Greta Thunberg. But as the last few days have proved, organisations are mobilising to deliver action beyond poignant speeches to create frameworks for tangible action.

With this in mind, this article rounds up all the key news and views from days four to eight of COP25. You can read about the happenings of day one here, days two and three here, and the first week here.

Europe's Green Deal - A man on the moon moment 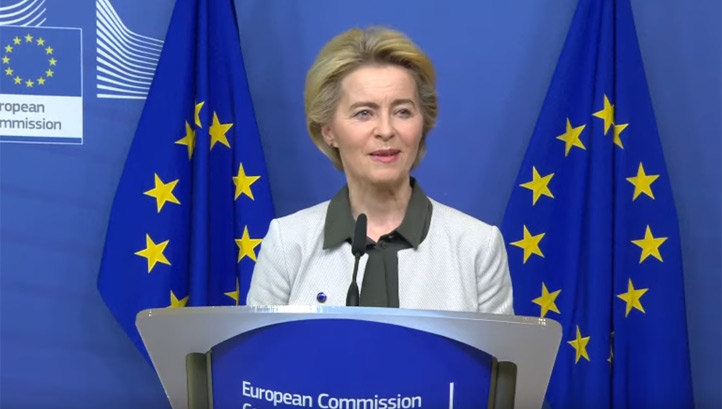 Donald Trump’s proclamation that the US would withdraw from the Paris Agreement was originally viewed as a massive dent in the global effort to combat climate change. Since his announcement, which technically wouldn’t become official unless he is re-elected next year, states and cities in the US have stepped up to fill the void.

Bloomberg launched America’s Pledge initiative in June 2017, which has since released annual reports with the aim of tracking the climate progress of nearly 4,000 cities, states, and businesses who are committed to the Paris goals.

Bloomberg was joined by a coalition of international climate experts, including UN Climate Change Executive Secretary Patricia Espinosa, and UN Special Envoy for Climate Action and Finance Mark Carney, to discuss the report. The report found that nearly 70% of the nation’s GDP is committed to reducing emissions to help push the country towards the Paris Agreement targets, without the help of Trump.

Despite Bloomberg’s efforts to bridge the gap left by a lack of US leadership, the Climate Action Tracker’s 2019 annual update has suggested that if every nation met their Paris Agreement pledge, it would still lead to warming of 2.8C by the end of the century.

That is very much viewed as a best-case scenario, as the report revealed that current policies in place across the globe look set to increase global temperature rise by more than 3C.

All governments have agreed, as part of the original commitments, to revisit ambitions in 2020, but the report has found that Chile is the only nation to submit a new draft proposal to date. More worryingly, coal is still a major factor for most government planning strategies for energy. Asia, in particular, is planning to roll out new coal capacity in countries such as China, Japan and South Korea.

“We are not seeing the kind of action you’d expect from governments facing a climate emergency,” said Prof Niklas Höhne, of CAT partner organisation NewClimate Institute. “Since last year’s update, our temperature estimate has not improved from climate action, and many governments are still failing to meet their often insufficient targets.”

Echoing the findings of the Climate Action Tracker is a report from Boston Consulting Group and the World Economic Forum, which shows the lack of progress on global climate action.

The report found that 67 of the UN’s 195 member nations—accounting for less than 15% of emissions—have a net-zero emissions ambition in place – although other think tanks claim that up to 40% of global GDP is covered by nations actively discussing net-zero legislation.

At a business level, the report claims that of the 7,000 corporations worldwide that actually report to CDP, only one in eight disclose their emissions fully and have a public target in place and are actively reducing year-on-year emissions.

“In the current context, corporations have a major role to play to fight against climate change,” said Michel Fredeau, BCG managing director and senior partner and head of the firm’s Climate and Environment impact area. “Given the difficulties to reach a global consensus, corporations need to accelerate their action to transform their business models to become compatible with a 1.5° world, taking the lead to align their ecosystems and their investors.”

In July, the UK Government finally unveiled its Green Finance Strategy (GFS), outlining how the finance sector and better climate disclosure from corporates can drive progress towards wider action on climate change and the push towards net-zero emissions. The Green Finance Institute (GFI) was then set up to steer the strategy.

At COP this week, the GFI announced the launch of its Coalition for the Energy Efficiency of Buildings. The coalition was created due to the fact that retrofitting and zero-carbon new-builds have not been adopted at scale in the UK across its 29 million homes.

Finance and property experts will now convene under the coalition to unlock capital to address the barriers to retrofitting of residential buildings, including for individual owner-occupiers, institutional and buy-to-rent investors, and social housing providers.

Dr Rhian-Mari Thomas OBE, chief executive Green Finance Institute, said: “Financial markets need to play a leading role to meet the needs of our society, and to mobilise capital to address the climate emergency. The Green Finance Institute’s role is to convene innovators, sector specialists and policymakers to harness their creativity to identify and overcome the barriers to the deployment of green funding.

“The Coalition for the Energy Efficiency of Buildings brings together a breadth of experience behind a clear goal: to accelerate capital flows towards retrofitting and developing UK homes to net-zero carbon, resilient standards through the development of real-world finance solutions that appeal to home-owners, landlords and investors.”

The new @GFI_Green Coalition for the Energy Efficiency of Buildings will establish the market for financing #netzero carbon, resilient buildings by accelerating the pace of financial innovation and scale-up. Read more: https://t.co/LHhEbG7MP3 pic.twitter.com/6lYvTq0Q2E

UK energy company Drax will announce ambitions to become carbon negative by 2030 at the UN's COP25. The move will see the firm use bioenergy with carbon capture and storage (BECCS) technology to remove more carbon dioxide from the atmosphere that it produces – creating a negative carbon footprint.

The firm is currently running a successful BECCS pilot at its power station, capturing a tonne of carbon dioxide every day. The CCS array, which is being used in partnership with C-Capture, first began capturing carbon in February.

Drax is the first company in the world to announce an ambition to be carbon negative by 2030 and we are confident we can achieve it - pioneering new technology is what we do best. #carbonnegative #COP25
Find out more ➡️ https://t.co/pwIkO2jTfF pic.twitter.com/nWl6bFwcip

Reforestation has risen up the corporate agenda in recent months, as companies turn to ways to help reach net-zero targets and ambitions. While offset discussions remain controversial, the world is waking up to the role that forest restoration can have. Trees act as a low-cost, effective, and scalable approach to mitigating the impacts of a changing climate while land restoration and regeneration was also a key talking point at COP.

Mars’ senior manager, climate and land appeared on panel discussions on Monday (9 December) to discuss how the private sector can make a business case to invest in forest restoration. Here, Allen summarises the key findings of that event exclusively for edie.

“Nature-based solutions play a fundamental role in solving climate change. Working closely with suppliers and farmers to stop deforestation and restore land is central to Mars’ climate strategy – and a critical step in our efforts to cut our carbon emissions across our value chain. It is imperative that all businesses make land a key part of their climate ambition,” Allen said.

“The world’s forests are vital to maintaining a healthy ecosystem, serving as important carbon sinks as well as providing many environmental benefits to communities around the world. Mars is working with farmers to ensure that the ingredients used in our products are grown responsibly, and reduce pressure on forests. We can’t do it alone, governments and the development community also play a critical role in protecting and restoring forests outside of farm boundaries.”

#COP25 is heating up! You can feel the buzz in the halls - the Ministers have arrived. ⁦@MarsGlobal⁩ #WeAreStillIn pic.twitter.com/rymVCbnMPO

Finishing on a piece of monumental news, the Science Based Targets initiative (SBTi) has representatives at COP25 and revealed that the number of companies planning to reduce emissions in line with the highest ambition has more than double in just a quarter of a year.

The SBTi revealed at COP that 177 corporates have promised to set science-based targets aligned to the 1.5C target of the Paris Agreement. The companies represent almost six million employees across 36 countries.

"We are quickly nearing our last opportunity to be on the right side of history," said Lise Kingo, CEO and executive director of the UN Global Compact, one of the SBTi partners.

"The climate emergency is already disrupting people, business operations, economies and ecosystems around the world. As countries prepare to enhance their national climate action plans next year, business leaders have a critical role to play in challenging governments to urgently match their climate ambitions. We need all businesses to be activists for our only future."

UPDATE: Since publication, it has been revealed that 500 companies are publicly committing today to accelerate the reduction of their greenhouse gas emissions to reach the 1.5C trajectory and transition to net-zero by 2030.

These companies, including well-known brands like Patagonia, The Body Shop, Allbirds, Davines, The Guardian, Aguas Danone Spain, Intrepid Travel, Ecoalf, and many others, are part of the global community of Certified B Corporations. The B Corp movement is convening to get all of its members to commit to net-zero by 2030.