With less than 50 days to go until COP26, this latest edition of edie’s Action Tracker paints a mixed picture – with positive announcements on climate finance and corporate sustainability marred by fears over Covid-19 preparations for the UN talks, and pessimism around its outcomes.

This exclusive series will be running regularly, bringing you the key headlines, statistics and events in the run-up to COP26 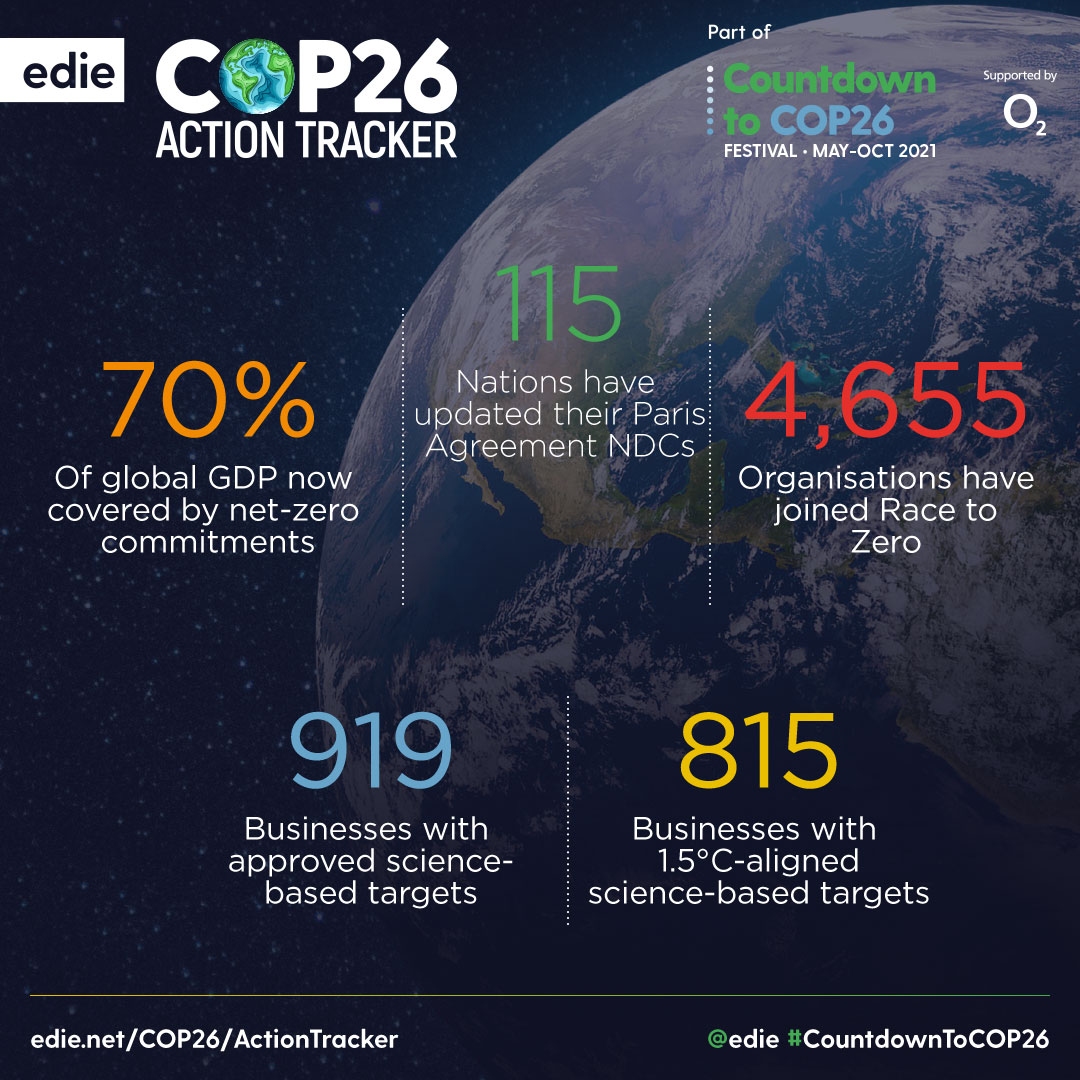 With less than five weeks to go until COP26 officially opens at the SEC in Glasgow, the UK’s green economy continues to await the Heat & Buildings Strategy, the results of the Treasury’s Net-Zero Review and the publication of the overarching Net-Zero Strategy. Sources have told edie that the Heat and Building Strategy may well be released this week, following delays that have lasted the best part of a year.

The recent cabinet reshuffle will likely have little impact on progress with these policy packages. COP26 President Alok Sharma and Energy Secretary Kwasi Kwarteng have both remained in their respective positions.

The big news since the last edition of this Action Tracker was published has been the launch of the UK’s first sovereign green bond package, or green gilts. The £10bn package was more than nine times oversubscribed when books opened on 21 September. Chancellor Rishi Sunak has already committed to an additional £5bn.

Also, Kwarteng has been kept busy by the continuing energy price crisis. Wholesale prices are up 70% on August levels and 250% on January levels.

As for COP26 itself, concerns are growing that the UK is not adequately prepared for the conference in diplomatic terms. The Climate Action Network, an organisation convening more than 1,500 civil society groups across more than 130 nations, has stated that COP26 will not be “safe, inclusive and just”, as the UK unit has not made adequate preparations in terms of vaccinations and affordable accommodation. Elsewhere, Australian Prime Minister Scott Morrison has stated that he has not made a firm decision on whether to attend COP6 in person, while representatives from South Africa are considering a boycott.

Keeping the focus on the COP talks themselves, the Guardian is reporting that representatives from the UN, UK and other nations are pessimistic that the outcomes will ultimately align global policy with the Paris Agreement’s 1.5C trajectory. The UN’s 2020 emissions gap report revealed that the world is on a 2.5C-2.7C trajectory.

The Guardian’s coverage came as the UN General Assembly came to a close in New York. The major climate-related agreement was a commitment for governments and businesses to collectively spend more than $400bn on clean energy by 2025. Funding, UN Secretary-General Antonio Guterres said, should be used to meet a “double imperative – to end energy poverty and to limit climate change”.

However, low-income and island nations have been imploring developed nations to go further, arguing that levels of climate action at present will spell a “death sentence” for their economies.

UK Prime Minister Boris Johnson’s speech at the General Assembly was the subject of much ridicule on social media. He reiterated his plans to focus on “coal, cars, cash and trees” at COP26 and urged nations to “grow up” and “take responsibility for the destruction we are inflicting, not just upon our planet but ourselves”.

Better received were US President Joe Biden’s pledge to double the nation’s overseas climate aid to more than $11bn annually by 2024 and Chinese President Xi Jinping’s commitment to end his government’s support for coal projects overseas. Jinping is now being pressed to provide more clarity on how China will reduce its domestic reliance on coal.

More recently, the German election counts were finalised in the early hours of this morning (27 September). Angela Merkel’s successor will be Social Democrat Party (SPD) leader Olaf Scholz. The SPD has stated that its preference is net-zero by 2045 and that it will consider moving the coal phase-out date forward from 2038.

Between Climate Week NYC in the US, Great Big Green Week in the UK and World Green Building Week globally, it’s been a busy time for sustainable business announcements.

You can read edie’s round-up of the many business announcements made at – or to coincide with – Climate Week NYC by clicking here. Highlights include 86 new signatories for the Climate Pledge, co-orchestrated by Amazon and Global Optimism; a commitment for £12bn for Scottish offshore wind firms from Orsted; the expansion of Starbucks’ ‘Greener Stores’ initiative and Walmart’s completion of its first green bond issuance, totalling $2bn.

To mark World Green Building Week, edie worked with innovation partner Springwise to publish a feature summarising 11 exciting innovations which are helping to make the built environment sector more environmentally friendly. Read it here to find out more about technologies such as AI optimisation systems and carbon-sequestering paint. We have also published a new, free-to-download Business Guide to Net-Zero Buildings in association with Integrated Environmental Solutions (IES). Click here to download your copy.

“It is the biggest economies in the world that are causing the problem, while the smallest suffer the worst consequences.

And while progress is being made all over the world, the gulf between what has been promised, what is actually being delivered, and what needs to happen… it remains vast.

Too many major economies are lagging too far behind.

And tinkering around the edges, simply denuding the tree of its lowest fruit, simply won’t achieve the change the planet needs.”