First Minister Nicola Sturgeon has told COP26 attendees that "frankly, no climate pledges are being kept" at the moment, urging business leaders and others to keep the pressure on world leaders at the summit and beyond. 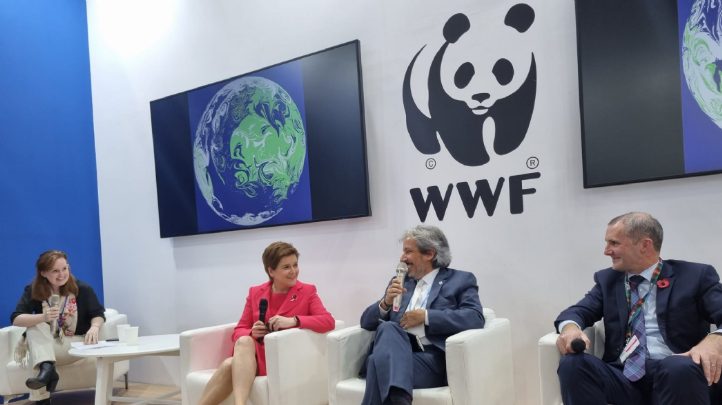 Sturgeon was speaking at an event hosted by WWF at the Scottish Events Campus this morning (1 November), with a focus on the role that non-state actors including cities, regions, states and the private sector can play ensuring that 1.5C is “kept alive” in the outcomes of this year’s UN negotiations.

Climate scientists have concluded that the world is likely to surpass 1.5C of warming above pre-industrial temperatures by the 2030s and reach 2.7C by 2100 under current commitments from nations. This level of warming will bring about the worst physical impacts of the climate crisis. As such, the onus is on world leaders this week to increase commitments and provide clearer plans for delivery for those that already exist, but are not being adhered to.

Sturgeon was asked what role non-state actors can play in this situation. She admitted that no climate pledges are being kept by nations at present, stating that “It’s time to deliver and there’s no excuses. These messages need to ring out through summits like this”.

Messages like this are coming from world leaders in the most-affected nations, from youth groups, from climate activists, from civil society groups, from NGOs, and, increasingly, from the private sector.

Sturgeon said: “What can everybody do? Make life really uncomfortable for any government and any leader that’s made an agreement and is not doing enough.

“At times, that will be my government, and rightly so. We have all got to be pushed much harder, much faster. This summit should not feel comfortable for anybody in a position of leadership and responsibility… because nobody, yet, is doing enough, and that’s the reality.”

“Making sure that the voices are very loud on what has to be done here,” Sturgeon said, needs to be a priority in the coming days. But she also stated that pressure must be kept on nations in the coming years, as, even if promises beyond the level of anything made before are made, nations need to be held accountable for delivering them, and doing so in a way that is just and fair.

Sturgeon was speaking on a panel alongside Scotland’s Cabinet Secretary for Net-Zero, Energy and Transport, Michael Matheson, and WWF’s global climate and energy practice lead Manuel Pulgar-Vidal. Pulgar-Vidal notably served as President for COP20, which took place in Peru in 2014.

Pulgar-Vidal said that, in 2014 and before that, “the business sector used to be outside of the COP walls. It used to be a parties discussion only”.

The picture is far different here in Glasgow this week, with fossil fuel firms effectively banned and all manner of other large businesses showcasing their net-zero plans, their latest innovations and their public communications campaigns.

Pulgar-Vidal noted that the various “sectorial entry points” to collaboration on net-zero to have emerged in recent weeks have given many sectors the ability to either put pressure on nations to increase climate targets, or have the certainty in the market that they need to implement specific delivery plans. Such initiatives include the Mission Possible Partnership, which covers sectors collectively representing 30% of global annual emissions, including steel and aviation.

Speaking exclusively to edie after the talk, Pulgar-Vidal laid out three “key levers” which businesses should now pull, should they wish to influence national policymaking on climate, and/or to ensure that the initiatives needed on the ground to meet top-level targets are delivered.

He said: “Firstly, businesses have a mandatory responsibility to define clear targets that are strongly based on science and make only credible claims….. What we are expecting from businesses are fully decarbonised value chains.”

This is a clear reference to participation in the Science-Based Targets initiative (SBTi), which is overseen by WWF, CDP, the World Resources Institute (WRI) and UN Global Compact (UNGC). The SBTi recently released the world’s first global standard for corporate net-zero emissions.  In the coming years, 2C-aligned targets will be phased out and 1.5C will become the new SBTi minimum requirement.

“A second element is that we need to have more, and stronger, coalitions of non-state actors being ready to help cities, regions and even national governments to develop and implement their ideas,” Pulgar-Vidal continued.

“What we have done since the 2014 Lima Call for Climate Action has been fantastic, but we are still moving this at the global level – we need to be strongly enabled to take action domestically and even there has been even less [progress] when it comes to this locally.

“The third key lever is that we must move cities and local governments, plus businesses, to define clear net-zero targets. They should be together working with strengthening, developing and then implementing. That, to me, is the way to connect both the business and the city agendas.”

According to the UN, responsibility for at least 50% of global annual emissions ultimately sits at city, region or state level. Local areas will need to collaborate with businesses on issues including transport decarbonisation, energy efficiency, low-carbon buildings and nature conservation and restoration. Moreover, in many cases, businesses and cities are more easily able to secure public engagement.