While the so-called 'war on plastics' movement has encouraged retailers to take ambitious action to make their packaging more sustainable, it has also served to distract the public from other green issues, Ocado's head of CR Suzanne Westlake has claimed. 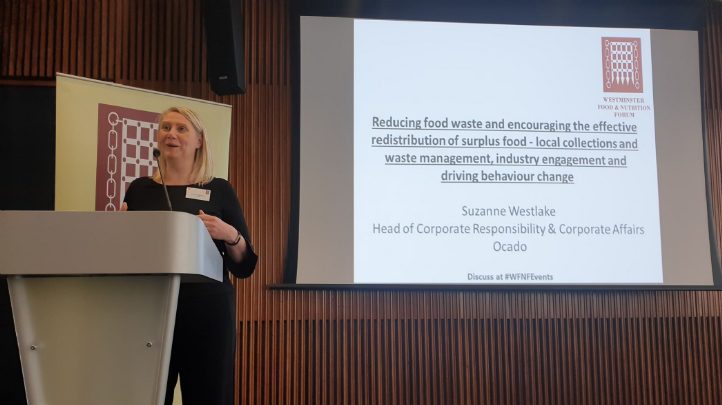 Speaking at the Westminster Forum on Food & Nutrition’s keynote seminar in London last week, Westlake was asked whether she believed the growing focus on single-use plastic food and drink packaging among policymakers and consumers was “a threat” to meaningful conversations around other environmental issues.

She explained that the increased focus on plastics was a key driver for Ocado joining WRAP’s UK Plastics Pact when it was founded last year – a move that has seen the company successfully eliminate PVC and polystyrene, which are both considered hard to recycle, from the business. Signing the Pact has additionally enabled Ocado to create a “crib sheet” on how to ensure that all purchasing aligns with its plastics pledges.

On the flip side, however, Westlake argued that it has made talking to customers about topics such as how packaging can reduce food waste more challenging. Cucumbers, for example, typically last for up to 14 days when wrapped in plastic film, or three days when left unpackaged.

“Customers want plastic gone – I would almost go so far as to say the appetite and feeling is bordering on militant,” Westlake said.

“But it’s not an argument that wants to be heard. It does feel a little bit like talking to a wall at times and I feel very frustrated that quite a lot of that is fuelled by the media.”

Westlake’s sentiment was echoed by the Department for Food, Environment and Rural Affairs’ (Defra) Food Waste Champion Ben Elliot, who said that while most Brits now see reusable items such as coffee cups and metal straws as trendy, there is “so much more to be done” on getting people to care about their food waste footprints.

“As a society, for all sorts of reasons, we don’t value food as much as others,” Elliot said. “We spend 5-6% of our weekly household income on food, for starters, compared to 12% in France and 20% in Japan.

“We’ve taken a view, because we’ve only got so much resource and time, that we need to go after younger people. [Around] 50% of school leavers now go on to university, so if you can nail them in their first term, you’re onto something. You’ve got to see where you can change peoples’ perceptions the most – for most young people, that means tying food waste to the environmental impact of carbon emissions.

“You have to ask brilliant retailers, restaurants and manufacturing groups to come together- but I think we have to spend most of our time on young people and that we need an ‘Attenborough moment’.”

The discussion came shortly after WRAP published its annual food waste figures for 2015, revealing that the scale of the UK’s post-farm-gate food waste mountain has plateaued at 10.2 million tonnes.

In a bid to change this trend, several big retailers and restaurants have either launched new behaviour-change-focused communications campaigns in recent years or adapted their business procedures.

Similarly, Lidl recently began selling boxes of fruit and vegetables no longer considered at their best at a discount price. Called the ‘Too Good to Waste’ box, each £1.50 package contains 5kg of produce which is either ‘wonky’ or past its ‘best-before’ date but is still fit for human consumption. The retailer has also introduced additional price reductions on its fresh items that contain use-by dates – on top of the 30% reduction in place for items approaching the end of the recommended dates.

On a wider level, Defra recently launched a £5m scheme to help businesses tackle food waste “from farm to fork” – an approach which is being compounded by WRAP’s Food Waste Reduction Roadmap. Signed by more than 88 supermarkets, hospitality firms and food and drink manufacturers, the Roadmap aims to unite the entire food supply chain to minimise the £20bn worth of food and drink that is wasted in the UK every year.