In the official opening address for the COP26 climate summit, the UK's COP26 President Alok Sharma called on nations to work collaboratively to deliver the aims of the Paris Agreement and "launch a decade of ever-increasing action and ambition" that keeps 1.5C alive. 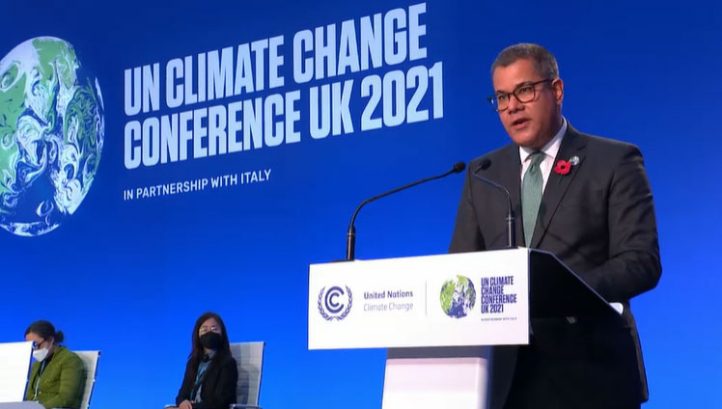 It’s finally here. After a disappointing yet understandable postponement in 2020, COP26 officially launched at the Scottish Events Campus in Glasgow on a rainy Sunday morning.

With delegates from around 200 nations converging in Glasgow to outline plans to cut emissions by 2030 and drive towards a net-zero future by mid-century, Sharma was officially recognised as COP26 president at an inaugural ceremony.

In his speech to delegates, Sharma called for collective action that “keeps 1.5C alive” by delivering on the aims of the Paris Agreement.

“We know that our shared planet is changing for the worse,” Sharma said. “We can only change that together through this international system and we know what we need to do, because six years ago in Paris, we agreed on our shared goals.

“We said we would protect people and nature from the effects of climate change, we said we’d get finance flowing to climate action and we said we would limit the rise of global temperature averages to well below 2C and pursue efforts to 1.5C.

“We can launch a decade of ever-increasing action and ambition and together we can seize the enormous opportunities for green growth, for good green jobs and cheaper greener power. We need to hit the ground running and that work starts today. We will succeed or fail as one… If we act now and act together we can protect our precious planet. Let’s make sure that where Paris promised, Glasgow delivered.”

Sharma noted that the climate crisis had “signalled an alarm” to the world to step up efforts to improve adaptation and resiliency and to address loss and damage. The COP26 President stressed that the Summit in Glasgow was “our last, best hope” to limit average global temperature increases to 1.5C.

The UN’s top climate change official Patricia Espinosa took to the stage after Sharma, reiterating much of his sentiment.

She said: “To all of you, I say congratulations. Congratulations to those in this room, watching online, involved in this process.

“Think back to [two years ago], when we met in Madrid. The early confusion of the pandemic and what it could mean for our process. The decisions we made together. The skills we developed together to take advantage of communications technologies. Think also of those we lost to Covid-19. Our hearts are with those who continue to suffer.

“But let us also acknowledge what we have accomplished. We’ve kept the process going; we have not let the pandemic stand in the way of addressing the most critical issue facing this generation and those to come. We are here because of you and your work.

“Let’s ensure that this work is not in vain. As Scottish poet Robert Burns wrote, ‘now is the day, now is the hour’. Colleagues and dear friends, we stand at a pivotal point in history. Humanity faces stark but clear choices. We either choose to achieve rapid and large-scale reductions of emissions to keep the goal of limiting global warming to 1.5C, or accept that humanity faces a bleak future on this planet.

“We either choose to boost adaptation efforts in light of current extreme weather and prepare for future impacts, or we accept that more people will die, more families will suffer and more economic harm will follow. We either choose to recognize that business as usual is not worth the devastating price we paying, and make the transition to a more sustainable future, or we accept that we are investing in our own extinction.

“It is about more than the environment. It is about peace, stability, and the institutions we have built to promote the wellbeing of all.

“It is for all these reasons and more that we must make progress in Glasgow. We must make this a success, as President Sharma has just said.

“Success here at this COP is entirely possible… we have the platform for action. The Paris Agreement… has everything we need to achieve our climate goals. But to fully unleash its potential, we need full implementation. To get there, parties must finalise work on the Agreement that has remained unfinished for far too long. Every day that goes by without being able to implement the Paris Agreement is a wasted day, the accumulation of which have real-world repercussions for people across the world, especially the most-affected communities.

“Success is possible because we already know the pathway to solutions.

“I call on all parties to recapture the spirit of multilateralism that led to the adoption of the Paris Agreement.”

Emphasising the importance of securing measures to support decarbonisation and adaptation in developing and emerging economies, Espinosa stated that the delivery plan agreed last week, designed to ensure the OECD provides $100bn annually to these nations from 2023, should be “the start, not the end”.

This is partly because the agreement was made in 2009 and reiterated in 2015, but has never been met, resulting in a funding shortfall. And, partly because nations need to “mobilise the trillions” from the private sector.

Sharma and Espinosa’s words arrive against a backdrop of stark, scientific warnings.

The UN’s latest annual Emissions Gap report, published last week, found that climate commitments and plans from national governments are currently aligned with a 2.7C temperature increase, despite many nations badging their updated targets as net-zero or compliant with the Paris Agreement’s 1.5C pathway.

Separate research from the annual Climate Transparency Report found that G20 nations need to urgently ramp up climate commitments if the world is to meet the 1.5C pathway of the Paris Agreement.

The research found that, as of August 2021, 14 G20 members had announced net-zero targets by mid-century, covering 61% of global GHG emissions. If fully implemented, these targets would help in combatting an existing emissions gap, but not quickly enough. Current submitted NDCs look set to leave a “significant emissions gap of about 23 GtCO2e from a 1.5°C pathway” with the G20 accounting for two-thirds of that gap.

As such, COP26 is a critical negotiation during a time of political uncertainty and fervent grassroots activism. Last week, youth activists labelled Sharma and the COP26 Unit team as “hypocritical” over political decisions regarding the Cambo oil field.

At COP26, Sharma will be tasked with orchestrating global negotiations that see nations agree to raise Nationally determined contributions (NDCs) to the Paris Agreement to push the global economy towards 1.5C by mid-century.

Going into the Summit, the UN has received 165 NDCs representing all 192 Parties to the Paris Agreement. More than 100 new or updated NCDs were issued between October and September. Research suggests that around three-quarters of global GDP is now covered by an actual or intended net-zero target.

As such, Sharma’s final words in his opening speech are noteworthy. The aim of Glasgow is to deliver this level of ambition.

edie is reporting live from Glasgow over the next two weeks. Keep up to date with all the goings-on at COP26 through our Live Blog.